Welcome to AirFryDay, where — you guessed it —every Friday Mashable covers the latest trends, dispenses advice, and reviews recipes for your .

Here’s a sentence someone who works on the internet never expects to write: I should’ve read the comments first. But damn, it would’ve saved me a fair bit of time, a lot of cleaning, and an acrid smell overtaking my apartment if only I’d read the comments before testing a viral TikTok air fryer hack.

That’s because the comments pointed out something obvious about cooking popcorn in an air fryer. If you toss loose popcorn kernels in the basket of a heated air fryer, they will certainly pop. But they will pop and fly upward, sometimes careening into the heating element of an air fryer, which is typically placed right above the basket, totally exposed. Some kernels might even get lodged in the heating element, which would certainly not be good…

But we’re getting ahead of ourselves. First, , published by user , which garnered about three quarters of a million views. It’s super basic: Put loose kernels in air fryer, blast at 200 degrees Celsius — that translates to 392 degrees Fahrenheit — and cook for five to six minutes. Here’s how their product looked. How the popcorn hack was supposed to go.
Credit: screenshots: tiktok / Ameerah_mh

While it might seem pointless — since, you know, microwave popcorn exists — I can actually see the utility in this recipe. Using loose kernels, you choose exactly how much popcorn you make, which is helpful if you don’t want a whole bag. The recipe also doesn’t use any oil or butter — no added fats at all — which makes it an especially low-calorie snack for folks who want that. If you make loose kernels on a stovetop pot, you absolutely must use at least some oil to prevent burning and most microwave popcorns have at least some butter or oil. I can see the promise in tossing kernels in an air fryer basket, walking away, then having neatly contained popcorn in the basket five minutes later.

So I set about testing the recipe for this week’s iteration of AirFryDay.

One issue: The air fryer in ameerah_mh’s TikTok had a mesh basket. Mine has a nonstick grate, set inside the basket. Popcorn kernels would likely fall through the grate, and thus not . To correct this, I lined my grate with aluminum foil and poked holes through it, which would allow hot air to circulate underneath the kernels while also keeping them off the bottom of the basket.

From there I preheated the air fryer to about 400 degrees, set the timer to six minutes, dumped a handful of kernels into the foiled basket, and started the cooking process. 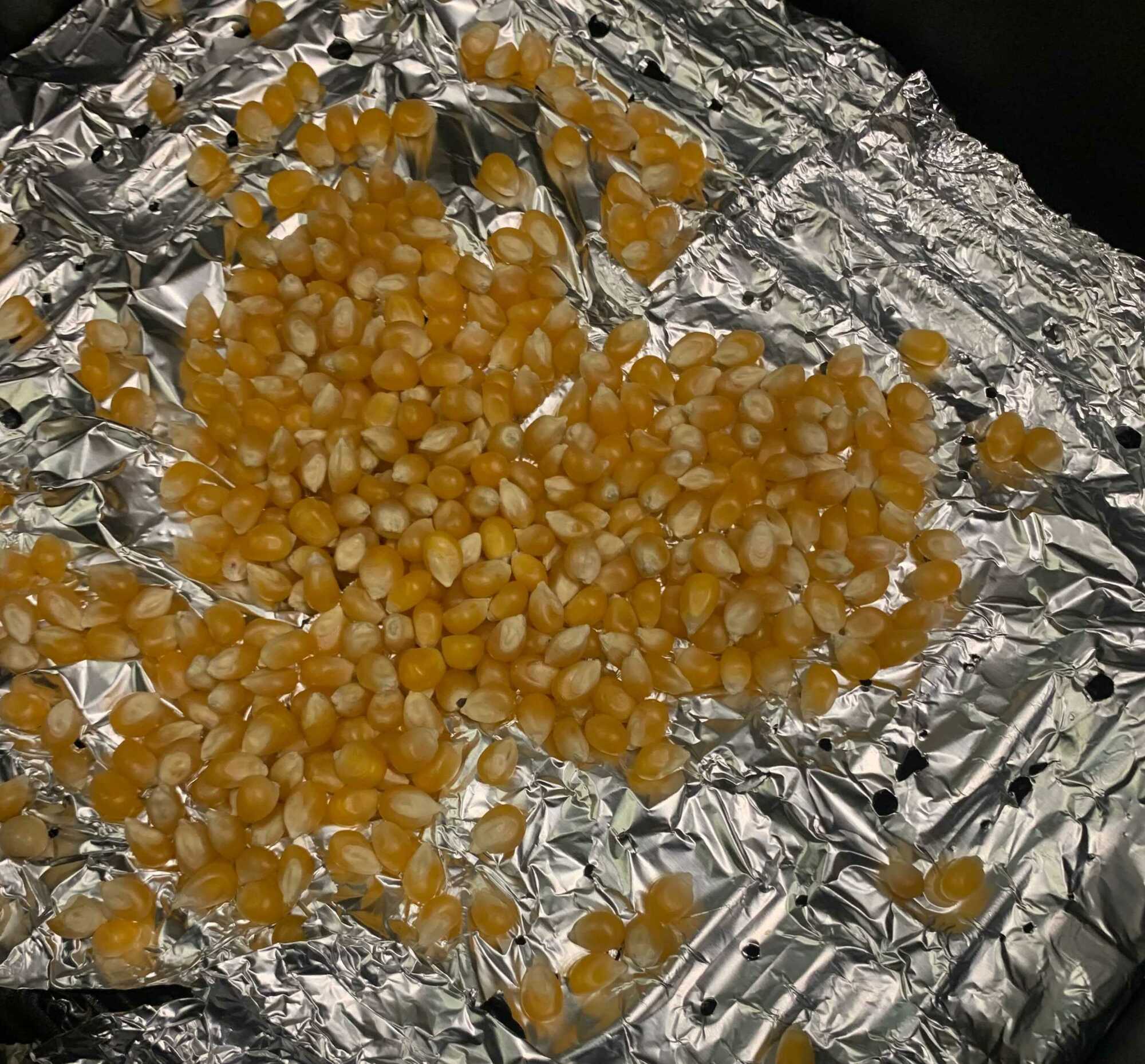 About one minute in, a few kernels popped. From there, I listened closely because the best way to cook popcorn is to pull it when the popping slows to a crawl. The popping increased until about 3 minutes were left, when kernels really started clanging around. For lack of a better term, the popping sounded violent. Then the smoky smell started leaking out. Shit, I realized, it’s probably ricocheting off the heating element.

Is this the end for my air fryer? I wondered.

Eventually the popping slowed and I turned the heat off with more than a minute left on the timer.

When I pulled the popcorn out, I was pleasantly surprised, considering the burning smell. There was a decent bounty of well-popped, stark white popcorn. No oil, no muss, no fuss. Sure, there were a number of un-popped kernels, but such is life with popcorn. 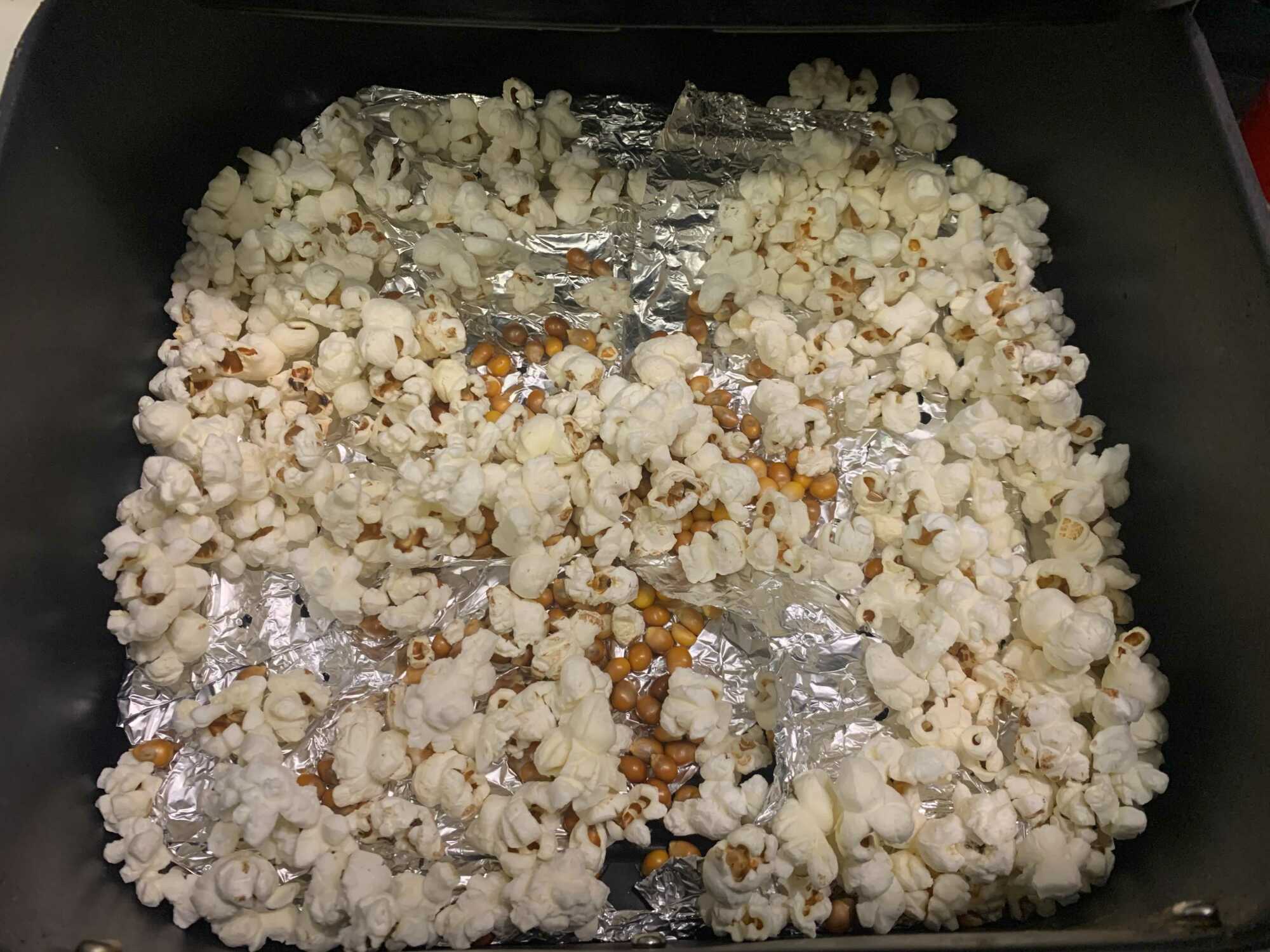 Not a great pop ratio, but not terrible.
Credit: mashable / tim marcin

I dumped the product into a bowl, enjoyed a few kernels, then salted the whole thing and crunched a big handful. Not bad! In a pinch, it was a healthy, easy snack. 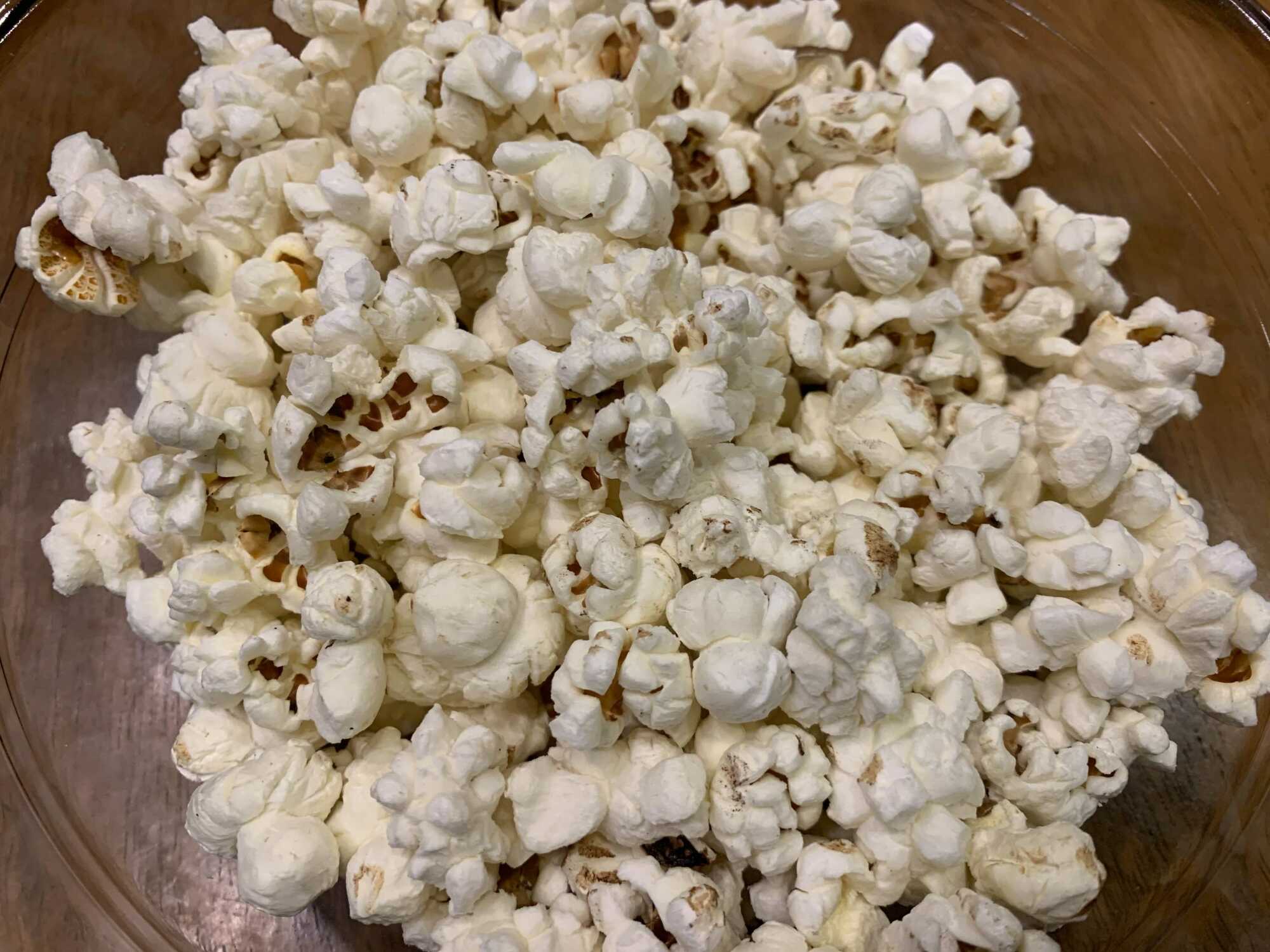 But then I inspected the heating element and yikes, it was not good. A fair number of pieces of popcorn had popped, shot into the heating element, and lodged themselves into the element itself. The popcorn was charred and still smoking. Frankly, it looked like a mess that was going to suck to clean. 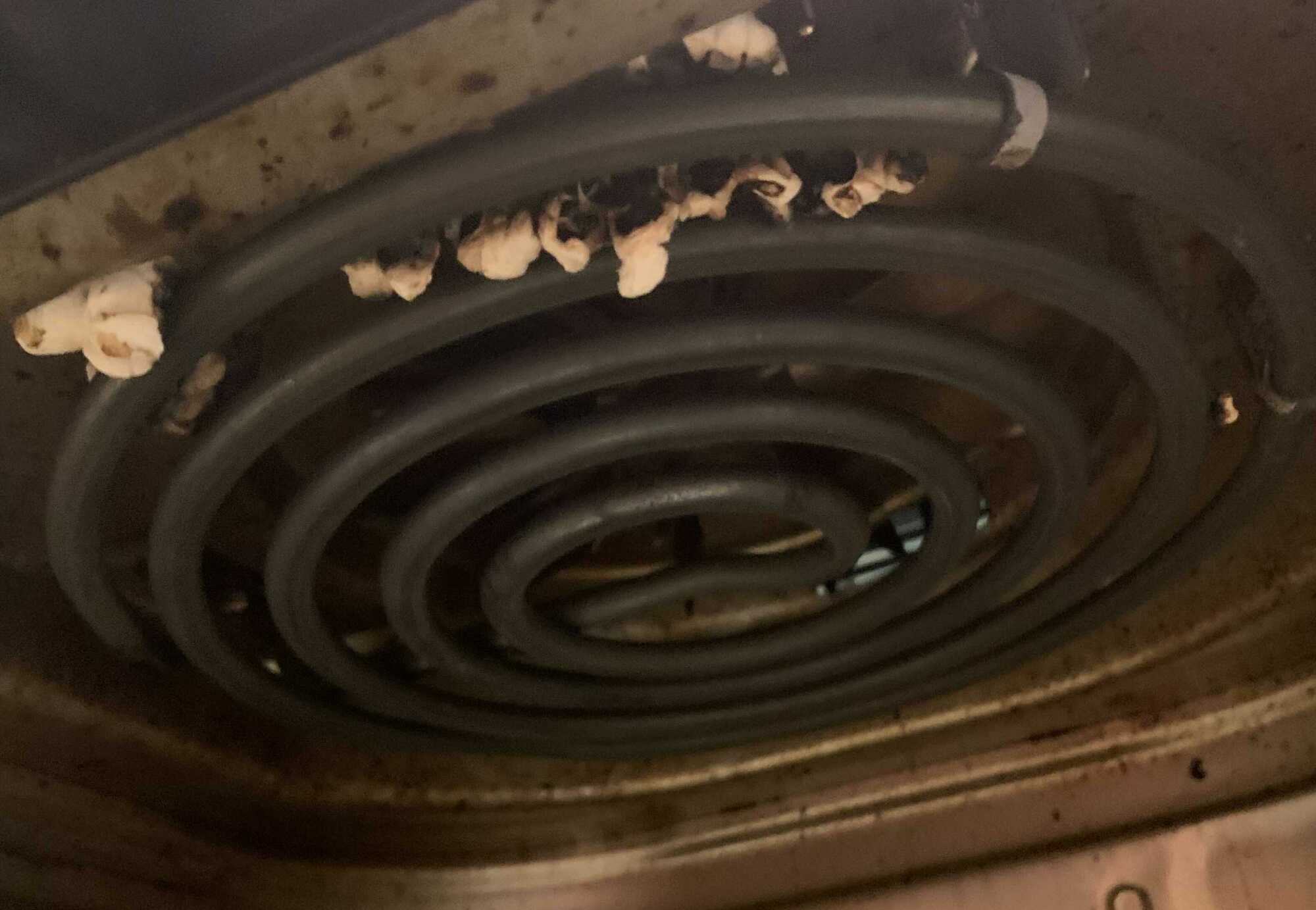 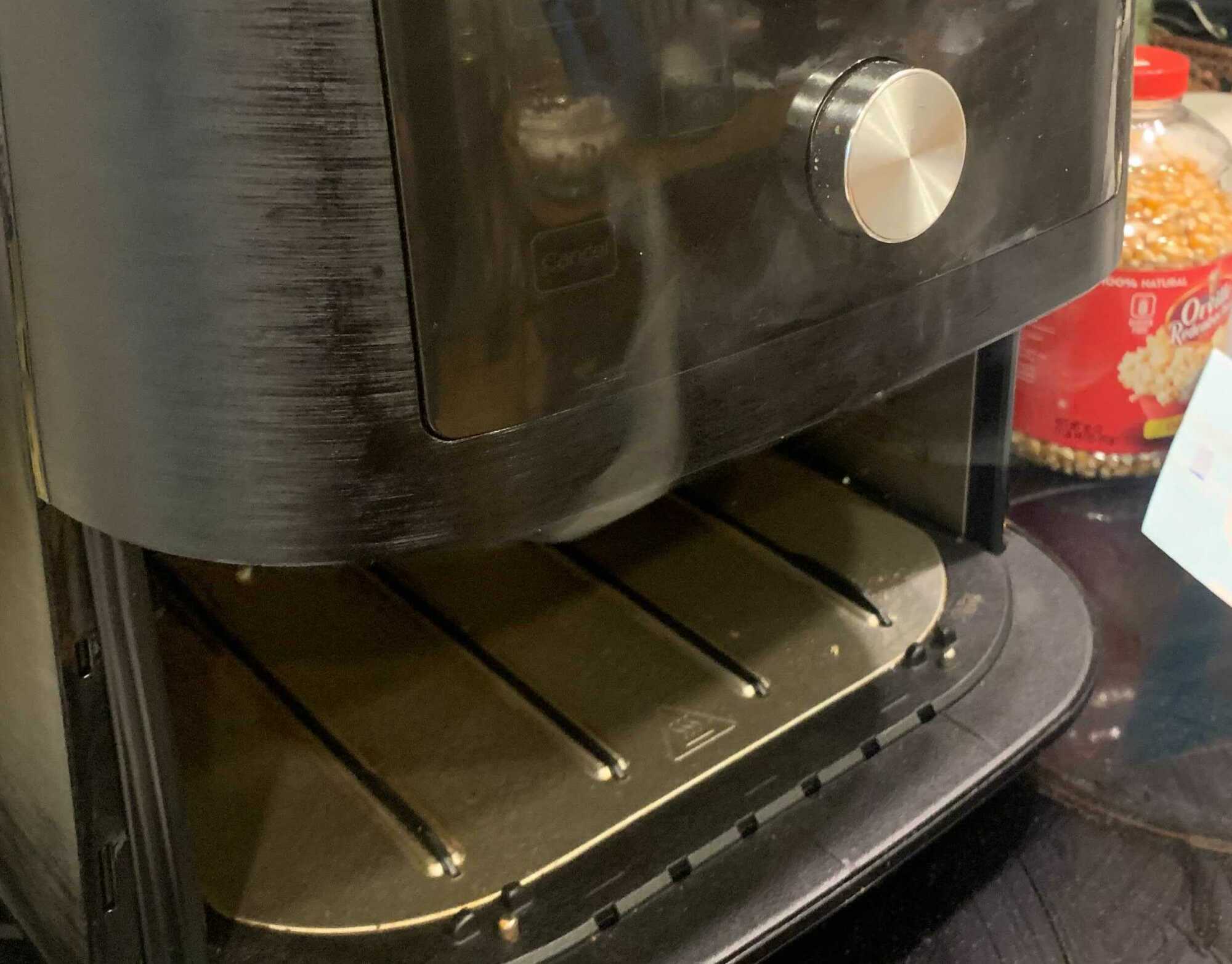 Never great when your air fryer starts smoking, even though it is turned off.
Credit: mashable / tim marcin

Sheepishly, I went to the comments of the viral TikTok to see if other folks had run into this issue. To my dismay, people pretty much predicted this would happen. “What about the element,” wrote one commenter. “Don’t do it. I have exactly the same air fryer and the popcorn burns on the element,” wrote another. “If any gets in the fan that’s a problem,” wrote a third.

Well, don’t I feel silly. So, yes, while this popcorn air fryer hack technically does work — heat pops popcorn, duh — there is no way I’d recommended anyone try it. Now if you’ll excuse me, I have a heating element to clean.