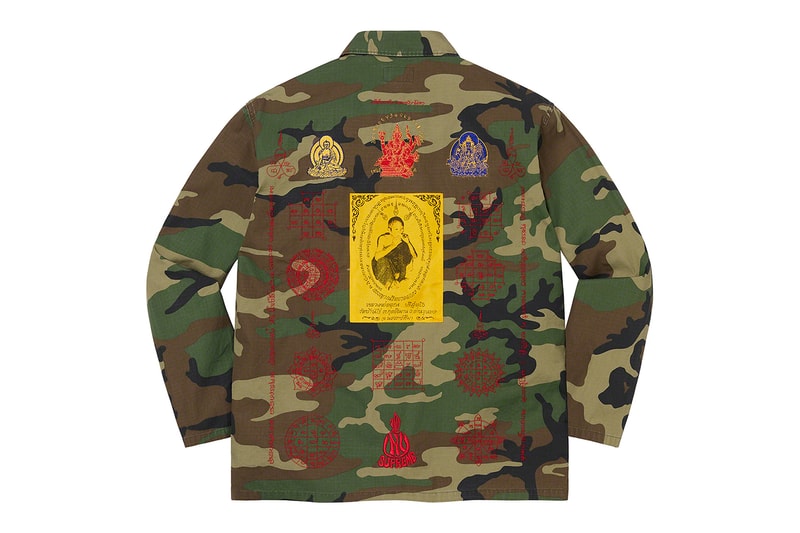 According to , is now considering legal action against .

The ministry-independent department-level government agency, which reports directly to Prime Minister Prayut Chan-o-cha, is reportedly upset with the New York-based streetwear imprint over its “unauthorized” use of an image of late monk Luang Phor Koon and yant script, sacred tattoos reserved for Buddhist monks and Brahmin holy men. The imagery and motif appear prominently without appropriate permission on the included in Supreme’s recently unveiled .

The image depicting the venerable monk sitting and smoking is said to be the most popular photo of the religious figure that passed away back in 2015. Originally taken in or around 2002 with the monk’s permission, the photo was created initially to raise funds for Wat Ban Rai, a Nakhon Ratchasima province temple.

In the official statement released last week by the National Office of Buddhism that highlighted its qualms, the agency revealed that it is currently drafting a letter to Supreme regarding the unauthorized usage.

Citing issues of misappropriation and infringement, the National Office of Buddhism notes that both the image and yant sacred script are subject to “full copyright protection,” that restrict “any replication, modification, disclosure in public or use of the creation without consent an infringement of intellectual property law.” Despite no formal copyright registration, if the Wat Ban Rai can provide proof of authorship and ownership both the photo and script would be protected by law for 50 years from the time they were created.

Tawatchai Sanprasit, manager of the Wat Ban Rai temple, also said in a statement, “We will discuss the issue [with Supreme], and find out what the brand’s purpose is,” before deciding on further action against the brand.

In case you missed it,