For some car lovers, on-street parking is unthinkable. You’ve got to have a garage to keep your pride and joy safe.

But what if you have more than one ‘pride and joy’? What if you’re an unrepentant car collector? What if even the biggest McMansion double garage isn’t going to cut it? Short of moving out to the sticks or renting an aircraft hanger like some sort of Bond villain, you don’t have many options.

One Melbourne family have come up with a novel, if ruthless solution: buy your neighbour’s house, knock it down, and turn the entire property into a home for classic cars. Meet (or really, 13 Creswick Street/14 Churchill Court) – one of the strangest houses currently up for sale in Australia.

As we alluded to, it’s really two houses. The owners bought the Creswick Street property in 2007, and then bought the neighbouring Churchill Court property over the back fence in 2009, initially bulldozing the latter and building a new house for their children to live in. Must be nice to have mum and dad build you a house… 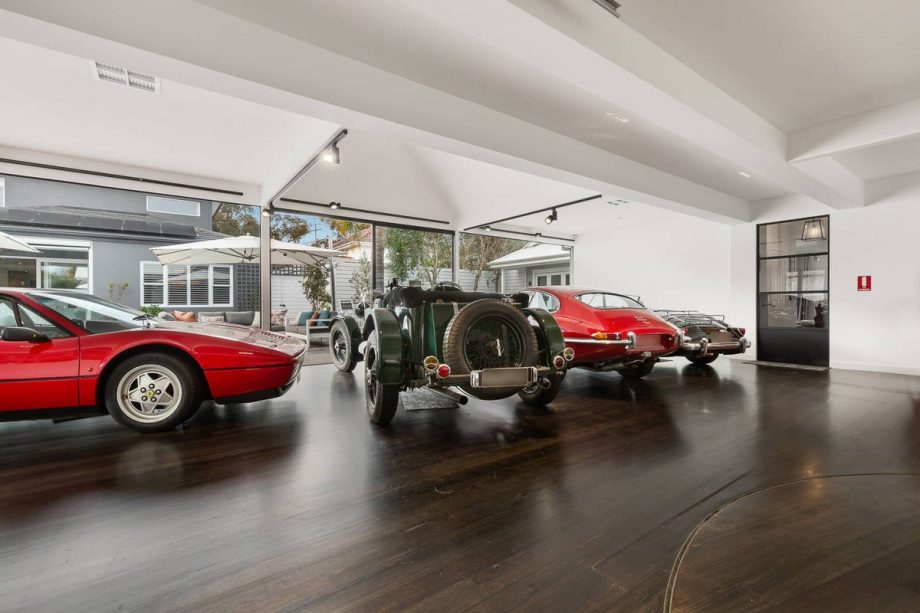 When you’re so rich, you build a house for your cars. Image: realestate.com.au

But after the kids moved out, they virtually gutted the new house and knocked down the back fence, in order to convert the property into one huge garage – complete with Tasmanian oak floors, a room for up to seven vehicles, a dealership-style car turntable and glass walls, so the cars inside could be on full display in the shared backyard. What an absolute flex.

The listing shows off some of the owner’s current beauties: a E-Type, a 308 GTB, an DB Mark III… We wish the house came with the cars, quite frankly.

Not that getting ‘just’ the house – or really, two houses – is a consolation prize by any means. The unique large shared backyard is touted as giving off “Whitsunday resort” vibes (especially with that huge pool) and is a drawcard in of itself.  Naturally, the main property is incredibly luxurious, too.

Some of its sumptuous features include a large kitchen with a butler’s pantry, hydronic underfloor heating, a private gym, and a soundproofed music/cinema room perfect for listening to booming Hans Zimmer scores or practising the drums or electric guitar as loud as you like.

Oh, and don’t be worried about the prospect of having to buy two separate properties – it’s now one consolidated block, which the two separate titles rolled into one. Although you could probably turn the Churchill Court residence back into a normal house… But why would you? The unique garage setup is half the allure.

The agent, Buxton’s Todd Dixon, confirms that a successful sale in the home’s $6.85m-$7.35m price guide would “smash” the suburb’s $6.3m high-water mark, reports. We wouldn’t be surprised if it went for even more than that – it’s the ultimate upper crust revhead pad.

Expressions of interest close on the 24th of August at 6pm, unless sold prior. Better get the Toorak tractor in gear if you want to secure pole position for this property.