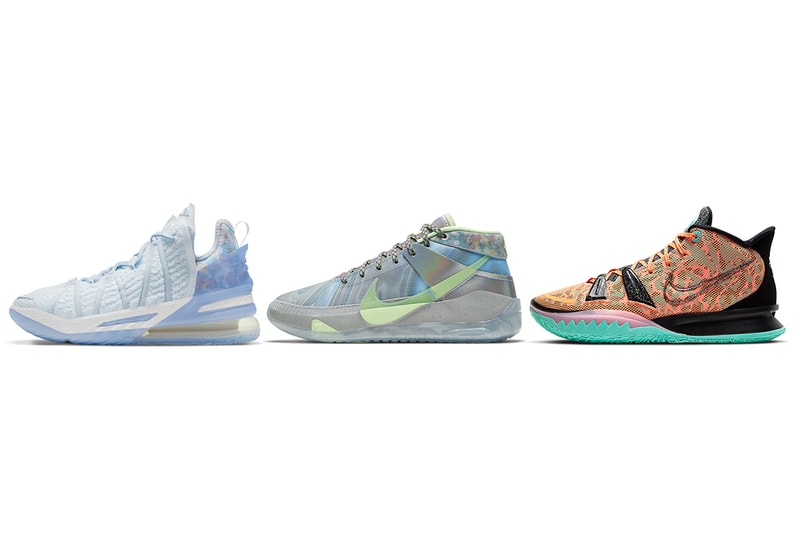 and its roster of hoop athletes is arguably the best in the business, and this season, the Swoosh’s basketball division is crafting a new capsule entitled “Play For The Future” for , , and that champions sustainability. The was previously unveiled, and now Beaverton has given us a detailed perspective of the , and iterations that are enlisted in the assortment.

For the ‘ 18-year veteran, his latest model comes prepared with an icy palette as its Knitposite uppers are lent a clean white surface, while the protruding heel counter and midsole molds down below balance out with faint blue hues. Where this court-ready iteration gets environmentally friendly is through the tongues and heel underlays, both of which are decorated with multi-colored Regrind materials.

Shifting over ‘s makeup, his takes a slightly darker approach by being anchored with silver-uppers and marbled blue and white patterns that run from front to back. Additional accents arrive by way of the pastel green Swooshes and interior lining, as well as the scrappy accents that are positioned below the ankle collar’s see-through film. Below, the installment is mated with speckled midsoles and translucent treading.

For, takes a different route and opts for a much louder presentation. Netted base layers cage over a vivd backdrop of orange and black abstract patterns, and arrive neighbored by a stark black spine that hosts a remixed “KI” logo with floral petals that poke out from the top. Regrind fragments also see their way to the forefoot and Swoosh logo molds. Additionally, the tongue logos split between ‘s logo on the right and an “ASW” notation on the left.

You can view detailed shots of the kicks here, and note that the entire assortment is set to drop via on February 23.

For more footwear news, official images of the have emerged.