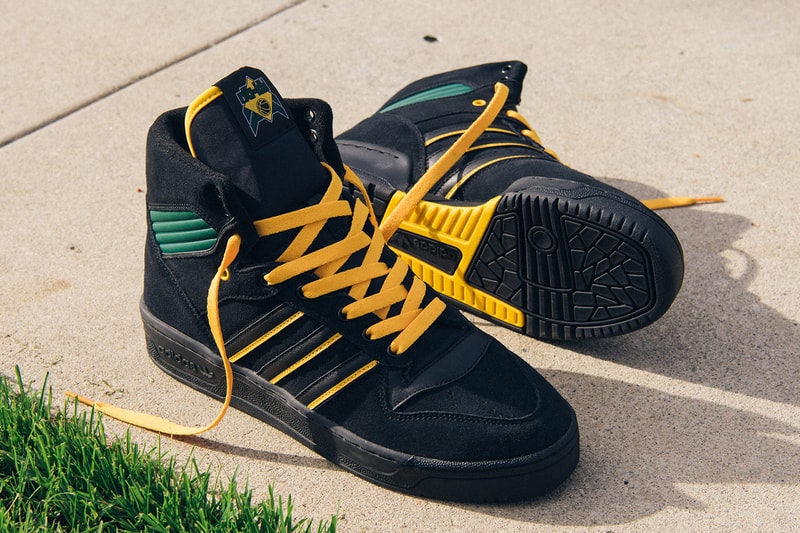 has reworked ‘s , a towering basketball sneaker from the ’80s that now serves as a lifestyle silhouette. As a member of the team, Smith is no stranger to collaborative footwear — he’s taken on everything from the to the in the past — but this marks his first foray into the world of strictly casual sneakers. A style sizable and sturdy enough that it was once worn by the great during his tenure with the , the Rivalry Hi offers plenty of space for bold accents, and Smith brings them in droves without compromising the classic look. Uppers mix black leathers and suedes for a departure from the Rivalry’s standard all-leather construction. This monochromatic dual-material base is embellished with plenty of gold, which appears on the laces and tongue’s border, is used as trim around the midfoot’s Three Stripe graphic and is stamped into the heel by way of a Trefoil logo. Dark forest green is also present, thanks to the ridged shank around the collar.

All these accents are brought together by the tongue badge, which melds green and gold while swapping out its standard “Rivalry” graphic for a “Na-Kel” hit. A black rubber midsole and outsole with more pops of gold wrap things up.

The Na-Kel Smith x adidas Originals Rivalry Hi will be available on the come January 18, with an MSRP of $110 USD.

adidas has been busy on the innovation front as of late too, releasing a — the lowest-priced shoe that boasts 4D technology to date.