Massage guns are everywhere. But do they work? Life-changing or just plain shady? Mashable is getting to the bottom of promises made by health and wellness products by answering the simple question: “?”

Lebron James has just come off the court to take a breather on the sidelines. He flings a towel over his head, chugs water, crashes down onto a padded chair, and then proceeds to take out…a massage gun? He moves the handheld device up and down his calves and quads, semi-watching the game, semi-zoned out.

James, like many other athletes and fitness aficionados, is actually using a These handheld devices a user can wield on their own muscles — the original of which is the , which came out in 2016 and has spawned scores of imitators — combine a vibrating head with the repetitive motion and pressure of a drill that athletes (or anyone) can use for a super-charged, targeted massage on their muscles. Essentially, vibration + deep, repetitive pressure = “percussive therapy.”

The guns entered the market in the late 2010s and have only become more visible through partnerships with athletes and leagues, not to mention social media. The and have partnerships with Hyperice (the company behind Hypervolt, which came out in 2018 and is an industry leader), while tennis player Maria Sharapova, famed quarterback Aaron Rodgers, NBA star Kevin Durant, and other in (and vocal supporters of) Therabody, which makes the Theragun.

Today, there are many companies making versions of percussive therapy guns. Most come in the shape of a right angle, with a handle and a shaft, though Therabody’s “ergonomic” design comes in the form of a triangle with the massage head protruding from one of the corners, so you can grip from multiple angles. The guns come with different attachments for the head — some softer silicone to absorb more force, some harder to pack a bigger punch, some with multiple prongs to deliver that pressure at different points. Both Hyperice and Therabody make Bluetooth-connected versions and have companion apps that lead the user through routines for different areas of the body, or to prepare for or cool down from workouts.

Check out Mashable’s comparison of the .

The promises these devices make are big, and so are the price tags of the most well-regarded products. You can pay anything from the low, low price of $30 for an Amazon knockoff to $600 for the “pro” version of the highest-end product, the . Advertisements and websites claim that regular use can help reduce pain and soreness from exercise while also improving general wellness, with some vague implications that they improve performance.

These value propositions, and the performance implications in particular, often come in the form of athlete testimonials: “Theragun helps me play longer and get more out of my body,” says soccer player Trent Alexander Arnold on the Therabody website. Superbowl MVP and new Hyperice investor Pat Mahomes says, “I’ve used Hyperice throughout my career as an instrumental part of my overall training and recovery routines to ensure I’m performing at my peak on game day.”

The claims of multiple companies boil down to the idea that the combination of a head that can hit your muscles both really fast and really deep is more effective than massaging or vibrating alone. Supposedly, this sends blood to the area you’re massaging, which helps muscles warm up for exercise and repair. Supposedly, it will increase flexibility and range of motion by encouraging , which can theoretically improve performance. Supposedly, it will cause your body’s pain responses to chill out. Therabody even says its percussive therapy, when used regularly, can potentially help you sleep better (just make sure to use it before bed and , too).

“The reason people love the product is because it feels good, obviously,” Jim Heuther, the CEO of Hyperice, said. “But it’s actually changing the viscosity of the body and the fluids within the body which allows you to have that energy in circulation.”

These products do not have large, peer-reviewed studies backing up their claims.

However, these products do not have large, peer-reviewed studies backing up their claims. A couple small studies ( and , respectively) have found that percussive massage can increase range of motion and decrease stiffness in the calf muscles. The latter study found percussive therapy to be just as effective as manual massage, and “possibly more effective” than foam rolling or vibration therapy.

But, despite some encouraging results and similarities to more established technology, it’s a stretch (~see what I did there~) to say these studies prove the efficacy of percussive massagers at the level that companies are claiming.

“It’s a big leap to say, from changes in physiology, that you’re going to get an increase in performance,” Darryl Cochrane, a former trainer and current associate professor of sports, exercise, and nutrition at University of New Zealand Massey, who studies the effects of vibration therapy on performance, said.

In fact, the smaller of the two studies explicitly measured for increased strength following a five-minute treatment, and found no change in the group that underwent percussive massage therapy versus the control.

A published in Human Kinetics Journal establishes that “recovery” is important for athletic performance. This tracks with the theme of the athlete’s statements; they say it helps them play their best, or that they use it to “give my muscles a little extra boost,” as in soccer player Sam Mewis’ . However, the consensus statement also says that recovery includes free activities like sleep and letting time pass, while “proactive approaches” to recovery vary from activity to activity, and even among individuals. In short: You don’t need a $600 massage gun to “recover.”

A lack of gold-standard science is not necessarily a reason to write off these products entirely. One reason, according to Therabody, is that “basically science takes a long time to catch up.”

“Innovation moves a lot faster, while research takes its time,” Tim Roberts, the director of science and innovation at the company said.

Roberts and Therabody mostly point to (posters are overviews of research presented at conferences), non-peer reviewed reports, and internal and “upcoming” research to support their claims that the combination of massage and vibration in one handheld package can have the “local and global,” as Roberts put it, effects on the body they describe. Therabody and Hyperice also look at research around the effects and benefits of massage and vibration — separately — and extrapolate on what they can do when combined.

“There’s a good amount of science around vibration and percussion out there,” Heuther said. “Publications take a little bit of time to be published. But I think you’re going to see a lot of tangible, quantitative studies that emerge over the next 18 months around the space, because a lot of them started in 2019.”

Some researchers agree with the general idea of these assumptions about related therapy types and see potential in the unpublished research, while stressing that the claims are still unproven.

“There are several mechanisms, physiological explanations,” Andreas Konrad, a human movement, sport, and health researcher at Austria’s University of Graz, who authored the 16-person calf muscle study, said. “But it’s also only speculation, or maybe based on other devices.” 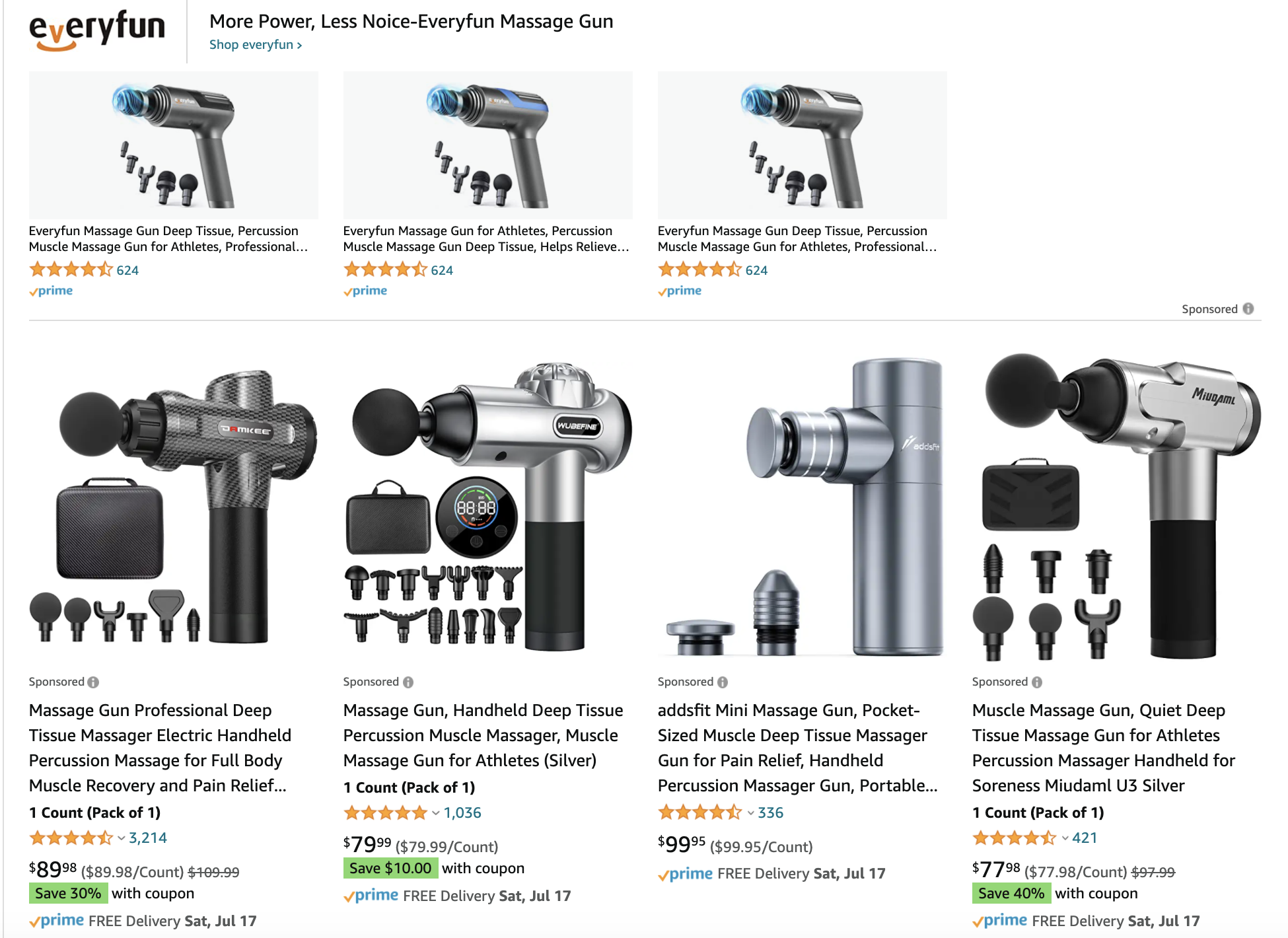 Still, those kernels of possibility are what made Konrad pursue his research.

In fact, Konrad — a triathlete in his spare time — uses a percussive massage gun himself. Mostly because it just feels really good, he said. Which gets to another point: If we’re asking “does it work?” when it comes to these devices feeling pleasurable in the moment, the answer, at least for Konrad, , and me, is heck yes.

To me, using one of these guns on my hamstrings or calves feels like I’m finally able to reach deep enough and hard enough into a place that’s screaming “untangle me!” Absentmindedly going over my quads or triceps while watching TV feels generally pleasurable. But if I really focus on one sore spot that’s bothering me after a workout, I get a sense of relief. At least, for the moment.

If I really focus on one sore spot that’s bothering me after a workout, I get a sense of relief.

“Although it hasn’t been proven by any stretch of the imagination, because it’s quite difficult to do control experiments on this, I think it’s probably causing a reduction in the pain receptors,” Cochrane said. “It may be feeding back to the brain and saying hey, you know, the vibration is causing this oscillation in the muscle, it’s maybe reducing the inflammation around the muscle or joint, and the pain receptors are being dulled a little bit. Maybe.”

So, is a short-term reduction in pain, some possible increased flexibility and range of motion, and potentially (unproven) other benefits worth the price tag? Remember, buying a fancy new toy won’t make you change your behavior, and Therabody’s Roberts even said “anything used once isn’t going to make the biggest difference.”

Then again, if you find yourself reaching for a convenient new toy when your triceps are sore, you could increase your mental focus on recovery. Be careful not to go too hard on sensitive areas like your neck or spine or joints. But if you focus on large muscles, there’s no known negative effect of using these massagers.

Both companies say their products are about living overall healthier lives. Therabody stresses that it is a wellness company that’s all about facilitating natural behavior change; Hyperice’s Hypervolt is about alleviating stiffness and soreness while also “unlocking human potential,” whatever that means.

At the same time, the company’s apps for their massage guns include pre- and post- workout routines. This directed use might be somewhat misleading: While the guns might feel good and potentially may have physiological benefits, there isn’t gold-standard evidence that supports using these devices as a replacement for — or even valuable supplement — to .

When it comes to exercise prep and recovery, there are plenty other things you can do that don’t cost half a grand. Cochrane points to plenty of sleep, hydration, and a balanced diet as the best places to start. Without a mix of these strategies, and others, an occasional massage session with a $400 gun likely won’t give you the edge you’re looking for.

“Everyone wants a silver bullet,” Cochrane said. “We are a society of consumers getting things that we think will work without having to do the hard yards. And I see recovery is a whole gamut of just not using one tool, but includes psychological, nutritional, and physical tools in the toolkit.”

So, if you can afford it, think of that pleasure-meets-pain luxury percussive massager as just one of those tools.