Like Peloton, but…in the pool? Guided swim workouts are here. 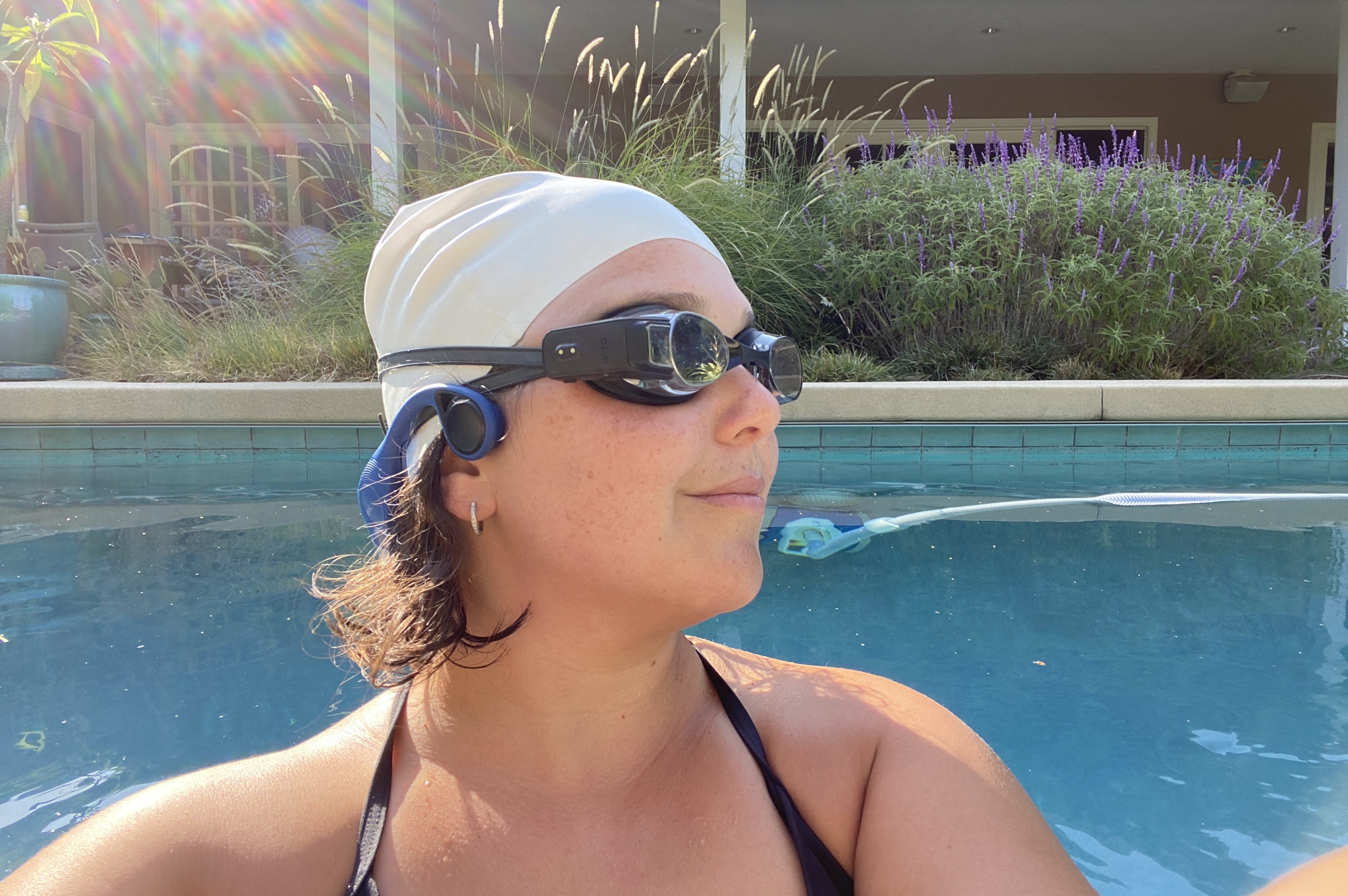 In 2014 I broke my butt (meaning, I pulled my hamstring) and had to start swimming for exercise instead of my usual squatting and elliptical use.

It didn’t last. Despite boasting to my friends about how refreshing the lap pool at the West Hollywood LA Fitness was, swimming was too much effort and too boring, with not enough payoff. Where was the sweat?

Would things have been different if I got injured in 2021 instead of 2014? Because today, there are multiple tech products meant to improve swimming with guided workouts.

I tested two of these products recently. One was the latest version of the smart goggles . The other, called , is a headset and app combo. Both offer subscription services that you’ll need to take advantage of guided workouts. 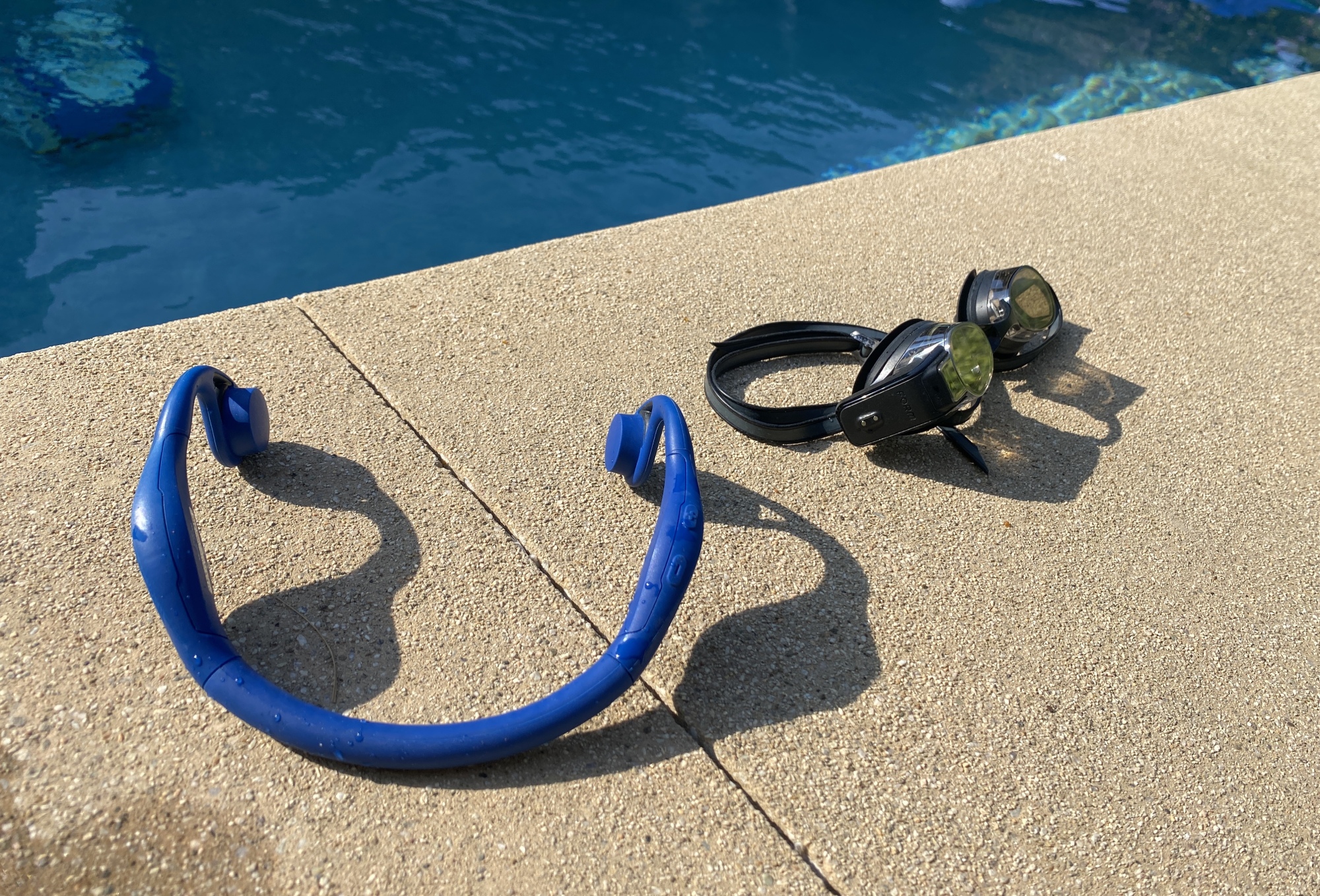 The Zygo headset and the Form smart goggles each have their strengths and weaknesses.
Credit: rachel kraus / mashable

Form goggles display metrics like time and distance in the swimmer’s field of view. Seeing the neon green digits floating in the water feels incredibly futuristic and cool, and also works surprisingly well. They make you feel like an aquatic cyborg.

While Form goggles originally debuted , the new version comes with guided workouts and are synced to an app. They count down the number of meters and lengths you’re supposed to swim, tell you at what intensity to swim — often alternating between shorter bursts and longer, slower intervals — and ensure you integrate proper rests between sets. 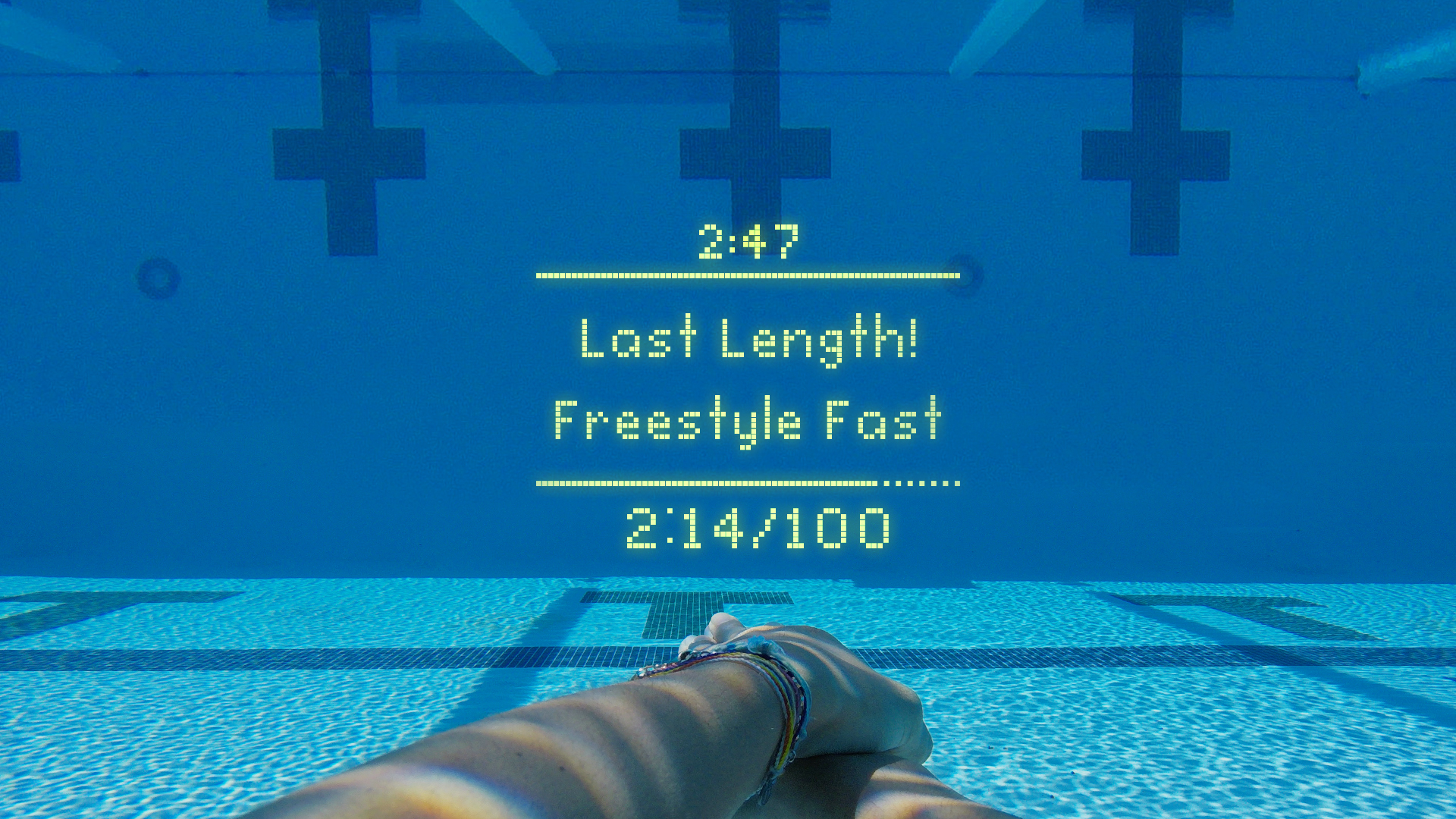 Here’s what it looks like when you’re swimming with the Form goggles.
Credit: form

The is a Bluetooth and radio frequency transmitter and headset combo, with an app containing audio workouts. The company advertises its product as “the Peloton of the pool.”

The hardware is actually a bone conducting audio headset with “speakers” that sit just beside your ear. A strap wraps around the back of your head and, of course, it’s all waterproof. The transmitter connects to your phone via Bluetooth, and then streams audio over radio waves to the headset. It lets you control the audio, and does double duty as a walkie talkie for coaches (or annoying friends or family members) to encourage/pester you while you’re under water. 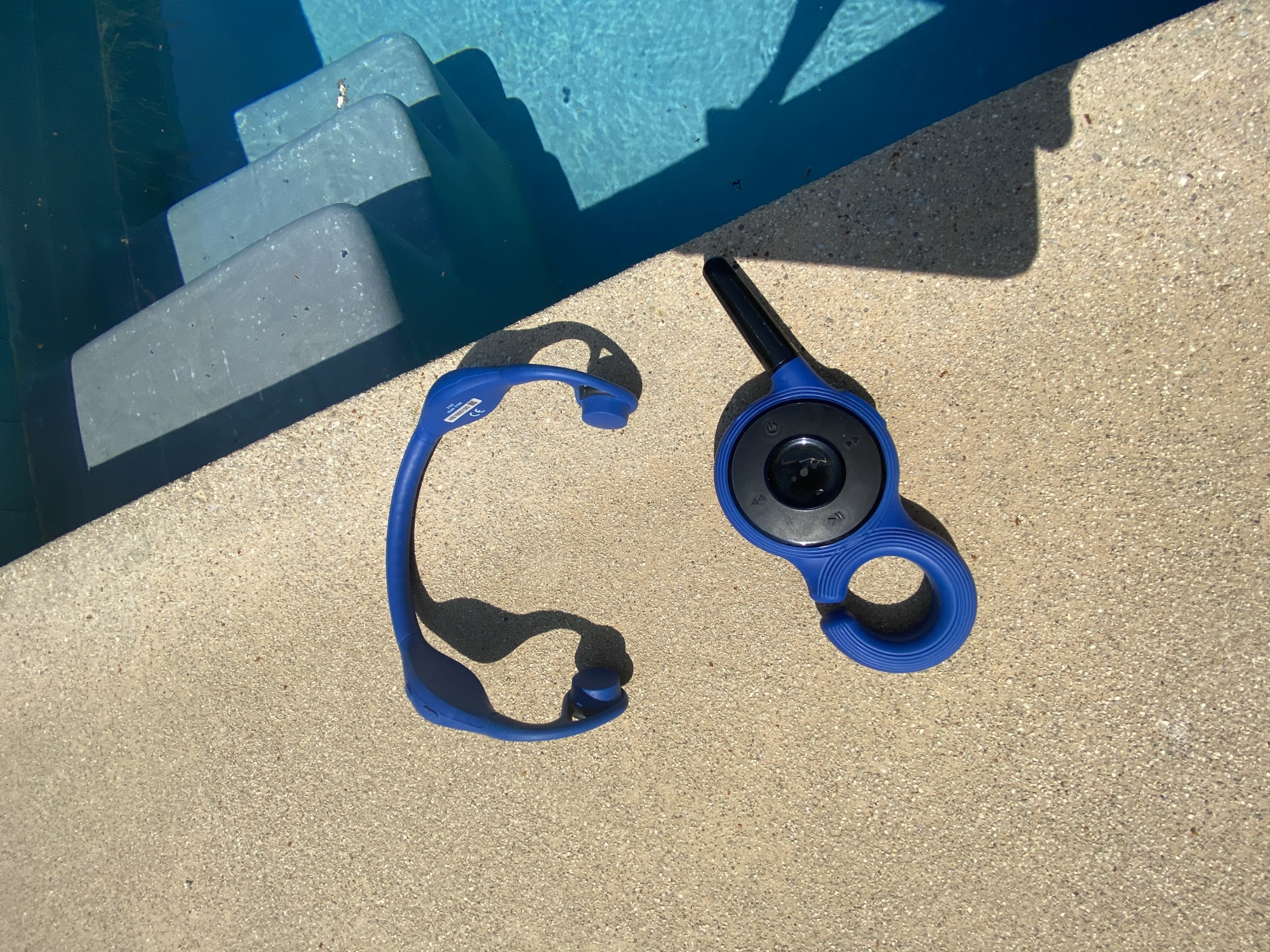 Your phone sends media over Bluetooth to the transmitter, which then sends that media to the headset over radio waves.
Credit: rachel kraus / mashable

I tried each product by itself, and even together. Both have promise, and I definitely happily spent more time exercising in the pool with them than I would have without them. But they both have limitations, too. I would never ordinarily choose to work out to an all Enrique Iglesias playlist, but free-styling my way to songs like “Bailando” made a recent 15-minute Zygo pool workout fly by.

Themed workouts are probably the biggest draw of Zygo. There are other waterproof headsets out there. But Zygo copies the Peloton model by providing hardware, software, and content.

I found the Zygo easy to set up and use, and it was comfortable. My mom, who regularly swims for exercise, tried it too, but felt that the bone conducting speakers that rest beside your ears were uncomfortable. So it’s a personal preference. 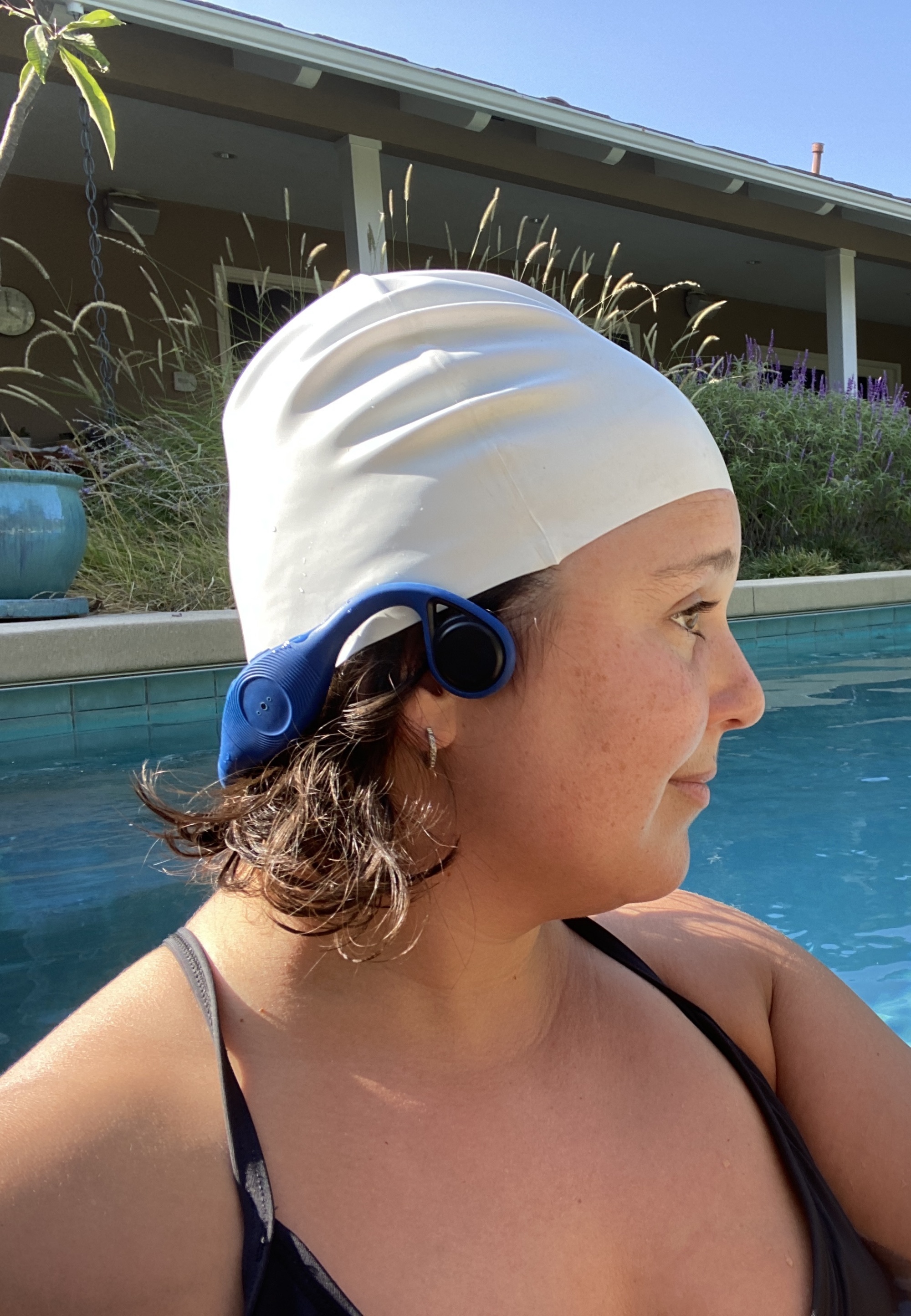 The Zygo ear piece should sit just to the side of your ear, where there is a small, triangular depression.
Credit: rachel kraus / mashable

One downside was charging. You have to place the headset very precisely onto the electrical nodes in the case, which resulted in my headset not charging one night when they apparently fell off.

In the ~20 meter pool I swam in, range was never an issue, although reception would dip out if I swam below the surface of the water. Zygo says its range is 50 meters and two feet below the surface. Even though the two foot depth didn’t hold true for me, the distance the piped sound traveled was impressive considering that water interrupts Bluetooth signals. This is why Zygo uses a combination of Bluetooth and radio waves to actually stream. However, there was always a non-zero amount of static, which for some reason improves when you wear the earplugs Zygo provides. Earplugs also just generally made the swim more pleasant by keeping the water out.

use Bluetooth, but rely on pre-loaded audio on whatever device they’re connected to. So if you want to actually stream audio while you’re in the pool, Zygo seems to stand alone.

Streaming is, of course, key to Zygo’s business, since it’s really hoping you’ll pair that one-time .

The app has a library that includes longer cardio workouts set to music, as well as drills, basic instructions, and even meditation. “Intro to Breastroke” helped me learn how to properly engage my abs while doing this “easy” stroke, while the meditation provided some serene active recovery. Other workouts take cues from companies like SoulCycle, with “mashups” between two artists, or routines supposedly performed by athletes like Katie Ledecky and Michael Phelps. All the while, various coaches narrate what you’re supposed to be doing, give you encouragement, and sometimes just chat.

The app records your swims, although it doesn’t record any stats. If you want swimming metrics, you’ll need a fitness tracker (or maybe some smart goggles).

I found these workouts a mixed bag. I liked the music because it helped me get in the rhythm of swimming and kept me motivated. It was helpful when it told me to swim easy or give it my all, since varying a swim isn’t something I would do much on my own. But the narration, which seems meant to build a personal connection to coaches, a la Peloton or SoulCycle, was just a bit much. It feels incongruous to be chatted at while you’re underwater.

Still, the silence of the pool intimidates me, which made me skeptical that the Form goggles would do much for me. To my surprise, my experience was consistent with of the previous iteration of the goggles, which was that seeing a countdown of laps and meters, and knowing how much time you had left and what time you had to beat, was more motivating than I thought it would be.

Form’s look and hardware do not appear to have changed much from previous versions. They still for the most part look like ordinary goggles, except for a small box on the right side that contains the computer. There are two buttons on the bottom of that box, the front of which lets you “select,” and the back lets you “scroll.” This is how you interact with the “screen,” which is a tiny heads-up display square in the right eye of the goggles. Look through the goggles and you’ll see text and metrics before you, as if it’s projected there. 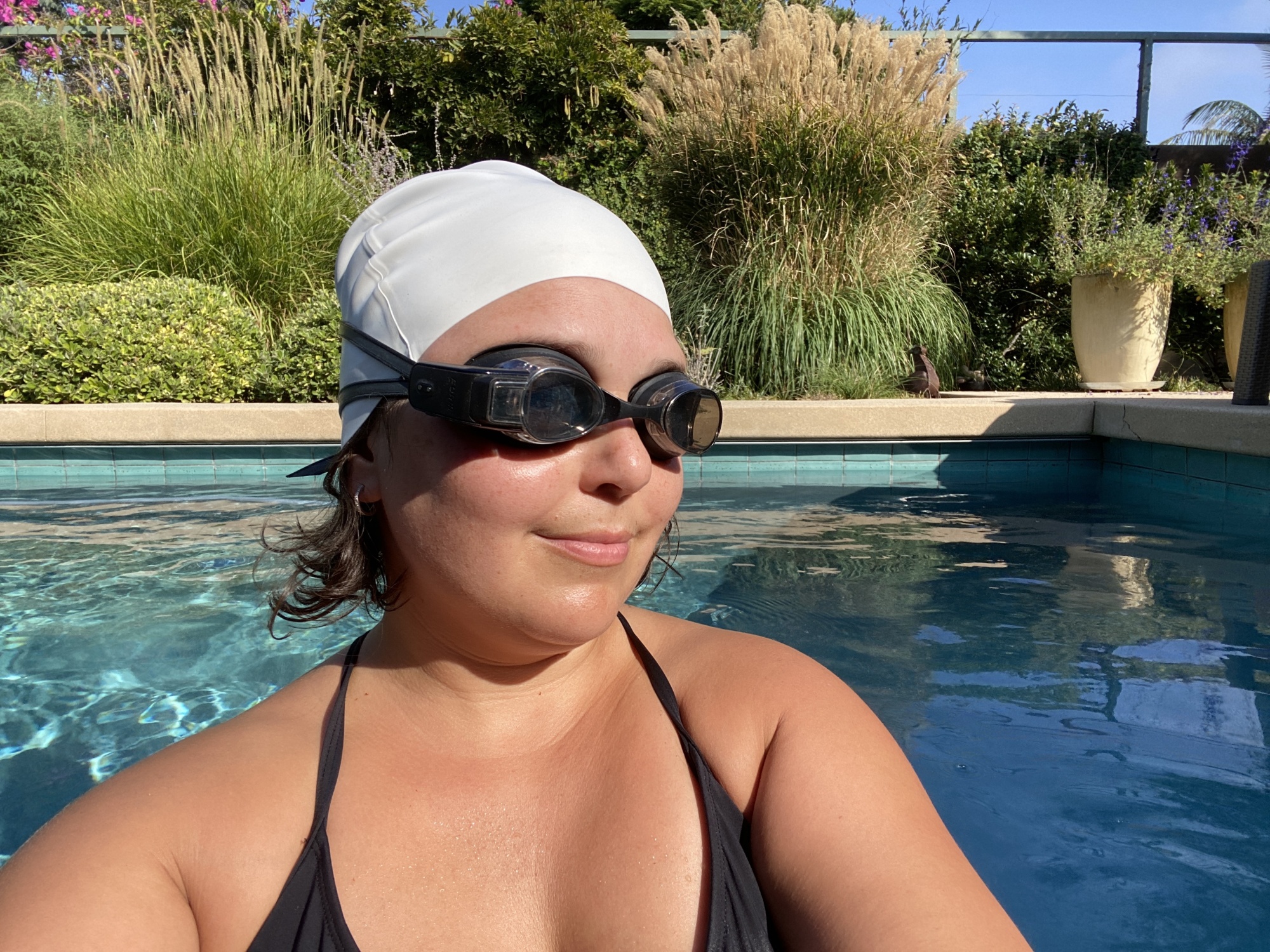 On the screen, you can select the type of swim you’re doing, like a pool swim, open water swim, or the company’s new offering, a workout. Workouts come as part of a subscription, but the purchase of the $199 device includes the first year, and then it’s $9.99 after that. (That’s the price of a current promotion — the app store lists the monthly cost as up to $19.99/month.)

You can load up to five workouts onto your goggles at a time. From basic drills to interval training, I really enjoyed the sessions I did. A beginning intervals workout kept me in the pool for nearly 25 minutes. Seeing “Go!” projected gave me a jolt of adrenaline, and the countdown clock and lap counter kept me focused. I was able to swim longer and farther than I had probably since my attempts in 2014.

I was genuinely surprised and proud that I could do it, and I was only able to maintain that speed and distance because of the in-view coaching telling me how many lengths to go per interval, when to rest, when to switch things up, and when to pour on more speed. I really appreciated that the workouts told you when it was your “last lap” of the interval, because nearing the finish line became a fun and motivating challenge.

Form works by syncing with a smartphone app over Bluetooth — but after swims, not in the water. The app is how you customize your display, and load workouts onto the goggles. It actually has a ton of personalization options: You can select which eye projects the display, choose which metrics the goggles show you, set weekly goals, and more. It also keeps your swim data, letting you track your metrics and compare them over time. This is similar to something a fitness band like an Apple Watch provides. But it’s definitely more difficult to check your performance on your wrist in the pool than have it projected automatically in front of you.

Since the Form provided the visual workout coaching and metric tracking I wanted, and the Zygo let me stream audio, I decided to try them out together. Having both elements led to my best swims: I really enjoyed just streaming music to the Zygo while doing the Form workouts. I didn’t enjoy doing the Zygo workouts while using the Form goggles in free swim mode quite as much, because it just felt like too much input.

I definitely felt a bit silly with all that hardware on, plus a swim cap and earplugs. But the audio and visual elements complimented each other and everything kept in place surprisingly well! Seeing the timer and distance in my field of view while I listened to my running playlist gave me a cardio experience where I pushed myself and actually enjoyed the feeling of swimming, syncing my strokes with the beat.

My mom, who swims a few times a week (and uses a music player with the wired, waterproof headphones it comes with to listen to music), was not enthralled with either product. She said that in the pool she just wants to swim, zone out, be alone, and feel her body working. The Zygo narration was disruptive to her, as was Form’s clock in front of her eyes. My mom and me sharing a lane.
Credit: rachel kraus / mashable

In the future, the audio component might work better if it incorporated practices like mindfulness, or focused more on the experience of swimming — how it might affect your body, mind, and life — than on simply completing the next lap and passing the time.

If you’re hoping to make the pool a part of your exercise routine, this technology is a great place to start and get some motivation. But guided swim workout tech still has some lengths to go.