Isn’t he always in a suit?

If you call Bond your style icon –

think outside the tux.

There’s a Bond style for every season and occasion.

Today we’re going to be looking at summer casual style. From Connery to Craig – there are plenty of iconic looks here that every guy can wear (though #7 may be a little divisive.)

This article is brought to you by Beckett Simonon, an innovative company that cuts out the middleman to bring you , shoes, and belts for a fraction of the price. Every item you buy is made to order specifically for you.

If you buy bags and shoes from conventional retailers, you’re paying THREE TIMES the wholesale cost. You can overpay for quality, or pay over and over for cheap stuff that doesn’t last. Take a third option – and use promo code RMRS at checkout to claim an exclusive discount.

Read on to get your James Bond casual style tips for summer. 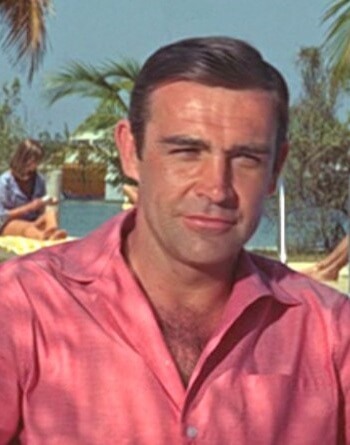 Bond’s favorite depend on the actor. Connery’s Bond wears cotton or linen camp shirts with a revere collar – a soft collar shaped like a mini notch lapel with a v neck and a low top button. It’s a sharpish look that lets you flash a little chest.

Pierce Brosnan in Die Another Day favored linen shirts. As well as white linen, he went for a HAWAIIAN linen shirt (in a subtle light blue on blue – so not too out of character.)

In Skyfall Daniel Craig wears a Zara Youth light blue microprinted shirt while ‘enjoying death’ on a remote beach. Zara discontinued this shirt – but you can sometimes find it on eBay.

Craig isn’t the first Bond to wear a polo (Connery wears a sky blue polo in Dr. No.) But the Sunspel Riviera Polo shirt was created especially for Craig’s Bond. He wears a navy one in Casino Royale, and black in Quantum of Solace.

For casual shirt colors Bond favors neutrals – especially navy – and brighter blues. It figures that when Bond does wear a bright color it’s the most ‘neutral’ one. Interestingly enough – Connery’s Bond was occasionally fond of PINK.

What does Bond carry besides his gun? As a stylish traveler he owns some stunning pieces of luggage.

In Spectre Daniel Craig carries a Brunello Cucinelli leather Boston travel bag in a lighter brown leather with an A-frame design. (Brunello Cucinelli also designed quite a few of his clothes in that movie – we’ll get to that later.) The duffle bag is a great affordable alternative.

In Casino Royale he uses a sterling silver money clip by Douglas Pell. It has four hallmarks: the Sponsor’s Mark (DP for Douglas Pell); the Standard Mark describing its finesse, or purity, in parts per thousand (925 means sterling silver); the Assay Office Mark (a leopard head for the London office); and the Date Letter Mark showing the year it was hallmarked.

British luggage maker Globe-Trotter supplied items like Bond’s rifle case in Skyfall and a Globe-Trotter Original Brown suitcase in Spectre. They released collections in midnight blue leather for the occasion. 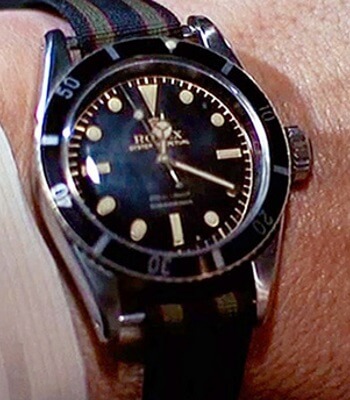 The most iconic of Bond is the Rolex Submariner – first worn by Sean Connery in Dr. No. Cheaper alternatives with a similar look are the Orient Ray and the Tiger Concept JB5508.

BUT Bond in the books wore a Rolex Explorer 1 – Ian Fleming’s own watch. (Cheaper alternatives include the Smith’s Everest and the Zeno Explorer.) It was changed for the movie because the budget wouldn’t stretch to a Rolex – so producer Cubby Broccoli lent Sean Connery his own Submariner.

Broccoli’s watch was too big for Connery – so he wore it on a green, red, and black striped nylon strap. Although everyone talks about the ‘Bond NATO strap‘ – this was just a regular single-piece strap. It’s only a NATO strap if it has an extra strap and buckle for security.

NATO straps are a great choice for summer casual wear as the extra piece keeps the metal of the case from touching your wrist. When they became popular people started wearing a GRAY and black stripe as the ‘Bond NATO’. The first Bond to actually wear this was Daniel Craig – in a nod to fans.

All Bond’s casual accessories have a few things in common: they’re simple, classic, sophisticated, and never TOO casual. ‘Restrained cool’ is the key.

Craig and Dalton both wore a woven brown leather belt. Choosing one with a solid leather end (where the holes are) makes it dressier.

Roger Moore in Live and Let Die and For Your Eyes Only wore a surcingle belt – a fabric belt with leather fittings. He favored cream/off-white fabric with black or brown leather and a brass frame buckle. 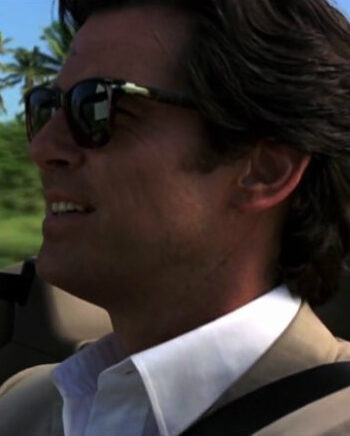 Bond has worn several over the years. Connery’s Bond wore wayfarers – Oliver Goldsmith ‘Consul’ (tortoiseshell) in From Russia with Love, and Polaroid Cool Ray N135 (black) in Thunderball. This was one of the earliest polarized models.

Persols had a heyday for a while. Pierce Brosnan wore the Persol 2611-S (discontinued) in Goldeneye – and the Persol 2672 was designed for him in Die Another Day. Daniel Craig in Casino Royale wore the 2244 – an unusual type with a metal rectangular frame – and the more classic 2720 in tortoiseshell.

Tom Ford shades are Bond’s newest favorite. The FT0108 model he wore in Quantum of Solace was made for the movie – and allegedly a copy of the Oliver Peoples Airman. In Skyfall he wore the Marko FT0144, with a light shiny rhodium frame and blue lenses. And in Spectre we get two pairs of Tom Ford shades – the Snowdon FT0237 in the color 52N and the Henry Vintage Wayfarer FT0248 in the color 52A.

So wayfarers have been worn by both Craig and Connery. This might make them your best bet for James Bond casual style shades.

We don’t know if Bond would go for double monks – but Pierce Brosnan in ‘The World Is Not Enough’ wears brown leather single monks (probably Church Westbury 173s in Walnut) with… a black belt. Don’t try that at home.

Daniel Craig wore brown derbys with his linen suit in Casino Royale. In Spectre he wears tan J Crew Kenton suede boots (modeled on work boots) in the desert. These have been discontinued – try Golden Fox 6″ Boondocker Boots in Khaki.

Bond has worn chukka boots in the last four films – from Die Another Day to Skyfall. They’re usually in brown suede or calf. 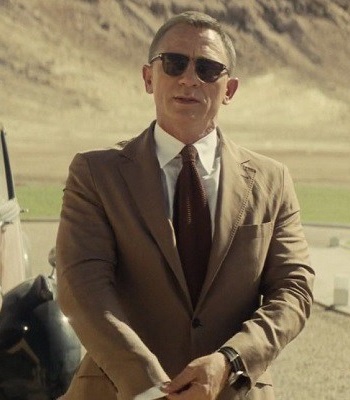 Most people think Daniel Craig is wearing a light tan linen suit in Spectre. He’s not. It’s actually a linen  by Brunello Cuccinelli with a fish mouth shape lapel, three-button front, and narrow shoulders – paired with Cuccinelli chinos in a very similar color, and a white shirt and brown knit tie by Tom Ford. (Knit ties are actually cooler in summer.)

However – he DOES wear a light gray linen Brioni suit in the Bahamas in Casino Royale. This suit has a peaked lapel, wide shoulders, and darted front trousers. It’s paired with Persol shades, a white short-sleeved shirt, and (as I mentioned) brown derbys.

It’s no accident that these low-contrast looks ended up on the blond Bond. Higher-contrast guys could pair a light linen suit with a dark blue striped shirt like Brosnan in Die Another Day. Take your cue from him and skip the tie – it wouldn’t look good on the dark shirt.

I know not all of you share Bond’s taste for skimpy swimwear. But this IS the most iconic piece of James Bond casual style  – so for those who are brave enough, here are the details.

Sunspel recreated these shorts (which you can buy from their website) for a Bond exhibition in 2011 using modern fast-drying performance fabrics and a superfine mesh lining. BUT… THEY USED THE WRONG PHOTO – from a different Sean Connery movie called Woman of Straw. So the shorts are a bit different – notably, no belt loops.

In conclusion – James Bond casual style is another man’s dressy style. 007 does NOT wear jeans and t-shirts… but he still looks cool and relaxed.

To look like him this summer, think sophisticated, classic, and restrained. Give a nod to summer with cool fabrics like linen rather than bold colors or patterns. Your most striking accessory should be confidence.

Speaking of accessories, were you tempted by that Beckett Simonon Domingo ? A bag like the Domingo can outlive you. It will resist any wear and tear while developing a unique patina over time. That’s why they’re usually so expensive. To get that lifespan you need the best materials and the best craftsmanship.

When you hold it in your hands and feel the pebbled full grain leather, the brass rivets, the YKK zippers and the rugged cotton twill lining, you’re going to fall in LOVE with your Domingo like I did with mine. and use discount code RMRS at checkout for a the best discount you’ll find on the internet.