Is it better to rent or buy? How to know when renting a home makes sense

I’ve been a homeowner for 24 of the last 25 years. Based on this, you might think I’m an advocate of homeownership over renting. That’s not the case. The older I get, the more I appreciate there’s no correct answer in the perennial “is it better to rent or buy?” debate. Sometimes buying a home makes the most sense. Sometimes renting is the smarter choice.

In an of Kiplinger’s Personal Finance, Knight Kiplinger wrote, “It often costs less to rent. The annual cost of owning a property, be it a house or a condo, is usually greater than the cost of renting, after taxes.” I agree.

Today, let’s look at a handful of ways to evaluate the rent versus buy decision from a financial perspective.

One way to tell whether it’s better to rent or buy is by calculating the price-to-rent ratio (or P/R ratio). This number gives you a rough idea whether homes in your area are fairly priced. Figuring a P/R ratio is simple. All you need to do is:

, David Leonhardt says, “A rent ratio above 20 means that the monthly costs of ownership well exceed the cost of renting.” That’s a little opaque, I know. Leonhardt is saying that the higher the P/R ratio, the more it makes sense to rent — and the less it makes sense to buy.

Based on this info, I’d argue that:

Nationwide numbers don’t tell the full story, of course. While the national price-to-rent ratio might be around 20, the actual numbers in your city could be very different.

In the past, I’ve struggled to find current price-to-rent ration figures. Recently, however, I learned that Zillow has . From here, you can download tons of different tables related to home sales and rental prices, including . If you’re looking to relocate, this is a fantastic resource for finding where your housing dollars will go farthest!

For kicks, I wasted ninety minutes playing with price-to-rent ratios using Zillow data. (What can I say? I’m a nerd!) I downloaded their list of and , then calculated the P/R ratio for 48 major metro areas. (For a variety of reasons, this is a somewhat arbitrary selection of cities.) Here’s my list of price-to-rent ratios in the United States as of January 2018.

If you’re moving to Scranton for your new job at , it’s likely you’ll want to purchase a home. But if you’re headed to the Bay Area, your best bet is going to be to rent.

I’m somewhat skeptical that these numbers are accurate — they do come from a site eager to create homebuyers, after all — but it’s tough to find better info. As far as I’m aware, there’s no reliable source that generates these stats on a regular basis. (I personally believe . However, that article is also eighteen months out of date and doesn’t explain its methodology.)

Another way to gauge the cost of housing is to compare it to your family’s income. From 1984 to 2000, median home prices were about 2.8 times the median yearly family income. (In other words, the typical house cost about three times what a family earned in a year.) During the early 1970s, home prices were about 2.3 times median family income. During the housing bubble, this ratio jumped to 4.2.

These numbers may not mean a whole lot on their own, but they can give you some sort of idea whether housing is overpriced in your area. Plus, it seems safe to assume based on past figures that most families can comfortably afford a home that costs about 2.5x their annual income. (So, if your family makes $80,000 a year, you can afford a $200,000 house.)

According to the most recent numbers from the U.S. Census Bureau, the median household income in the United States was $57,617 at the end of 2016. (Average household income is greater — — but that number is skewed by high earners, which is why I prefer to use the median.) 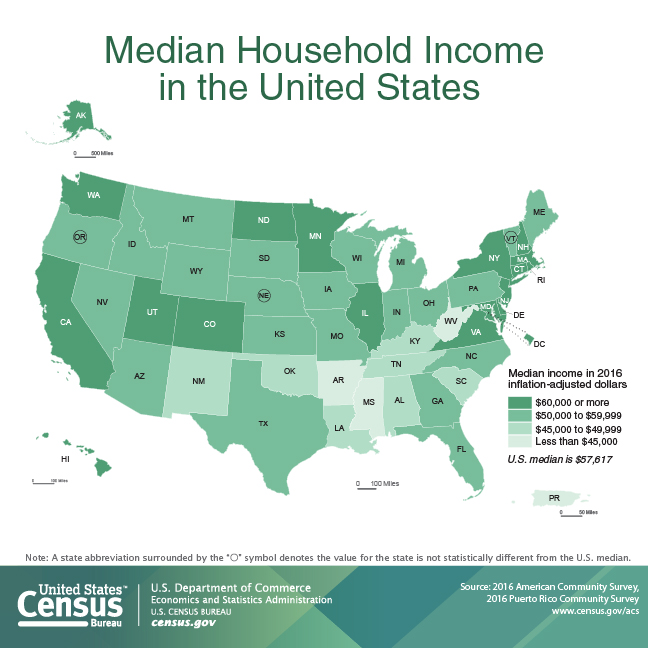 Using the current U.S. median home price of $232,700, we can see that home prices are currently running at about 4.04 times the typical household income. This ratio isn’t quite as high as it was during the housing bubble, but it’s still pretty steep. Based on this, renting is likely to make the most sense right now in many parts of the country.

My Favorite “Rent or Buy?” Calculator

Finally, I want to share what might be my favorite way to compare the costs of renting against the costs of buying.

The New York Times has a great that can help you decide which is best for you. Just plug in the numbers for your situation, and the calculator tells you how long it would take you to break even if you bought a house. This calculator is an amazing tool. Although it lives behind a soft paywall (which can be circumvented using incognito mode in your browser), it’s well worth using if you’re trying to make a decision about whether to rent or buy.

For fun, I ran the numbers for my own situation. Last summer, Kim and I purchased our current home for $442,000. When you figure all of the remodeling we’ve done, our actual cost will be closer to $600,000. (Holy cats!) Based on our situation, the NY Times calculator says that we’d be better off renting if we could find a similar property for less than $2767 per month.

Scanning current listings, there are three nearby rental homes similar to ours (more than 1200 square feet, more than an acre of land). They’re fetching $2900 to $3000 per month. So, it sounds like buying or renting a property like ours in Portland is a toss-up at the moment. (If I run the numbers using our home’s actual purchase price — $442,000 — I’d have to be able to rent for less than $2100 for that to be the smarter option.)

Deciding whether to rent or to buy is a complicated financial and emotional decision. I believe it’s a shame when folks who are unprepared get driven into the housing market due to misplaced notions of imagined benefits. Homeownership is not a panacea. Renting is not universal folly.

Part of the problem is the vast Real-Estate Industrial Complex, each piece of which has a vested interest in convincing consumers that bigger is better. (As I mentioned in my recent article on the in the U.S., the real estate industry is a relatively recent invention, barely 100 years old. But in that hundred years, it’s grown into a powerful force in our economy.)

The housing industry does its best to propagate certain myths about homeownership, myths like:

Now, let me be clear. There’s no question that buying a house makes sense for some folks, but mainly for non-financial reasons. Owning a home gives you stability (you’re not at the mercy of a landlord) and freedom (you can do what you want with the place). Heck, last year I chose to buy an eighty-year-old “country cottage” on the outskirts of Portland, so I completely understand the non-monetary reasons for wanting to own.

But there are also advantages to renting.

For one, you have flexibility; you can move at a moment’s notice. For another, you’re not responsible when things go wrong. If the shower starts leaking before you leave for your vacation in Duluth, you don’t have to worry about it — you call in the landlord.

If you decide to buy a home, do it for the right reasons: because it fits your goals and will make you happy. Don’t do it because you think it’s a good investment. A mortgage is not a retirement plan — it won’t make you rich. Instead, think of it as purchasing a way of life.

If homeownership is a lifestyle you want and can afford, then buy. If not, rent.