While the continent of Australia has been inhabited for over tens of thousands of years and is home to the world’s oldest living culture, the modern nation-state that we call Australia has only existed for a bit over a century.

The country has changed radically in that short amount of time, with our two biggest cities – Sydney and Melbourne – becoming some of the biggest, most vibrant and most influential cities in the Asia-Pacific. Looking at the lights of the Sydney CBD today makes it hard to think that not even 70 years ago, Australia was still a virtual backwater, with Sydney not much more than a big country town. But post-war immigration and economic success saw Sydney quickly become one a bustling metropolis, with high-rises popping up like daisies and big chrome barges of cars filling its streets.

It’s these old automobiles that had the denizens of looking back at the Harbour City through rose-tinted glasses, with a photo of the iconic Sydney Harbour Bridge’s northbound ticket booths in 1959 sparking lively discussion. The photo, which shows cars like Fairlanes, FJs and Morris Majors coming to grips with the bridge’s new layout after two more lanes were opened, had Redditors calling it a “simpler time” and pondering if that was the last time there wasn’t any traffic on the Harbour Bridge during the day.

“Too many cars and too many people for smooth crossings today… I wonder how it will be when Sydney gets to 9 million people in a few years,” one mused. We’ll admit, the idea of a Harbour Bridge sans gridlock is pretty tantalising. 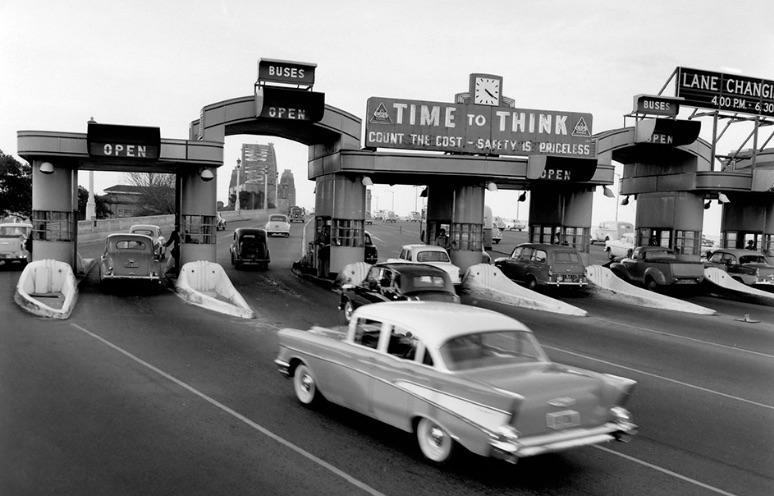 There’s more than meets the eye with this photo, however. Another pointed out that those extra lanes came at the expense of Sydney’s old tram lines, which by 1961 had been completely dismantled across the city in order to accommodate more road traffic, remarking that “Bradfield would be horrified.” one commenter remarked.

John Bradfield, one of Australia’s greatest engineers, was the designer and chief proponent of the Harbour Bridge, who had originally designed the eastern side of the bridge to accommodate a heavy rail service to the Northern Beaches – the tram line was only ever supposed to be a stop-gap. Losing the rails all together would have been galling to the meticulous Bradfield, whose plans for Sydney’s rail network never fully came to fruition (something Sydney’s reaping the consequences of all these years later).

Although another related that leaving the tram tracks there wouldn’t have necessarily helped the bridge’s overall carrying capacity:

“The highest volume by mode crossing the Harbour Bridge today is people in buses (not trains, they are second place), exceeding 200,000 crossings per day pre-COVID. This includes people from the Northern Beaches and The Hills, which would likely [have never been] served by tram.”

The photo’s also a bit misleading, as the bridge has always suffered from congestion. The Sydney Morning Herald’s archival Instagram account shared a photo in 2019 of the bridge in 1948 (over a decade earlier)… With traffic that’s bad even by today’s standards. Hard to be nostalgic for something that doesn’t actually exist.

The most salient point made in the thread is that any nostalgia for the 50s or earlier needs to come with a big grain of salt, as it was only “simpler times” for a select few.

“Think about the Stolen Generation, those with disabilities… Not everyone had it good back then,” one Redditor pointed out. “In 1959 this description fits the bill for pretty much everyone that isn’t white, to be honest,” another agreed. Our hot take? A Sydney without drive-thru wouldn’t be a Sydney that’s worth living in.