How Does The Gig Economy Translate To Physician Work? 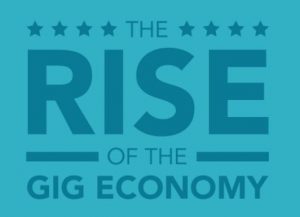 The New Yorker recently featured about a popular new episodic work style sweeping America: the “gig economy.” The gig economy unbundles units of work previously tied to an employer or specific job. Online platforms serve as conveners to match task requests with those seeking to complete them. The New Yorker notes:

TaskRabbit, which was founded in 2008, is one of several companies that, in the past few years, have collectively helped create a novel form of business. The model goes by many names—the sharing economy; the gig economy; the on-demand, peer, or platform economy—but the companies share certain premises. They typically have ratings-based marketplaces and in-app payment systems. They give workers the chance to earn money on their own schedules, rather than through professional accession. And they find toeholds in sclerotic industries. Beyond TaskRabbit, service platforms include Thumbtack, for professional projects; Postmates, for delivery; Handy, for housework; Dogvacay, for pets; and countless others. Home-sharing services, such as Airbnb and its upmarket cousin onefinestay, supplant hotels and agencies. Ride-hailing apps—Uber, Lyft, Juno—replace taxis. Some on-demand workers are part-timers seeking survival work, akin to the comedian who waits tables on the side. For growing numbers, though, gigging is not only a living but a life. Many observers see it as something more: the future of American work.

The pluses and minuses of this kind of work are fairly straight forward. On the positive side there is speed and convenience (both on the part of the worker, and the one who needs the work done). Rapid matching of task to worker occurs in an online environment that promotes competition and favors those with high ratings and a track record of success. There is flexibility for the worker – he or she can commit to as much or as little work as is convenient, and there is the opportunity for augmenting earnings as small, paying “gigs” can be added to already existing work. Variety provides challenge and interest.

On the negative side, choosing to do gig work full-time leaves the gigger without employee benefits (such as health insurance) and an insecurity of income stream. Without a large, trusted company as the agent for work, there are fewer guarantees of service (or protections) for both the hiring entity and the worker. With freedom comes insecurity. And then there’s the question about career advancement and long term economic effects of short-term work.

It seems to me that for most people outside of the healthcare marketplace, the gig economy works best as an income supplement, not replacement. In medicine, however, full time gigging may actually have more pros than cons.

In a system where fee-for-service healthcare is rapidly being replaced with bundled payments, shared responsibility, and accountable care, it is ironic that the workforce is moving in the opposite direction. Although initially physicians were driven to become hospital employees (instead of independent practitioners), now the pendulum is swinging in the gigging direction. Primary care is embracing the “” model, and more and more physicians are joining locum tenens agencies. I myself was an early adopter of both concierge medicine and locum tenens work.

is efficient – patients pay only for what they need (presumably from an HSA account), and there are incredible cost savings involved for providers, not having to code and bill insurance companies for services. As I’ve said previously, using health insurance for primary care is like having car insurance for windshield wipers. Expensive overkill.

As far as is concerned, there is no better way to prevent burn out and overwork than to reclaim control of your work schedule. Short term work assignments may be accepted or declined at the physician’s convenience. You can travel as far and wide as you have interest (there are international locums assignments available too), and gain exposure to various practice styles and locations. You set your hourly rates, and the pay is fair and transparent. No more uncompensated hours of extra work that fuel resentment towards your employer.

New companies such as are poised to revolutionize the gig economy for physicians. By directly linking physicians with job opportunities in an online marketplace, agency costs are avoided, saving money for hospitals and allowing for higher doctor salaries. The question remains if they will gain the user volume necessary to compete with agencies. Nomad Health will succeed if it can convene sufficient numbers of hospitals and physicians to make it worth the time on the site.

The gig economy is the natural evolution of our modern culture. As technology enables an on-demand lifestyle, work is becoming as modifiable as our media consumption.  Will chopping work up into smaller bits have a net positive or negative effect? For the companies creating the niche platforms that support the work marketplaces, the outlook seems positive. Uber, for example, is currently valued at about . They have drawn inspiration from video games to drivers to work longer hours, contributing to their success – and perhaps downfall. By maximizing their own profits at the expense of the drivers, their gigging community is beginning to look for greener pastures at Lyft. Competition is a critical part of the gig economy.

In healthcare, I worry that a significant physician shift towards gigging could be disruptive to care continuity and result in higher costs and poorer outcomes. That being said, the alternative of physician burn out, early retirement, and flight from clinical medicine is not acceptable. I suspect that the gig economy is going to change how physicians engage with the healthcare system – and that within a decade, a large segment of the workforce will be part-timers and short-timers. This may provide a sustainable way for older physicians (or those with family or childcare demands) to continue working, which could substantially improve the physician shortage.

Gone are the days of cradle-to-grave relationships with primary care physicians – I mourn the loss of this customized, deeply personal care, but I stand ready to embrace the inevitable. I just hope that I can connect with my “short-term” patients so that my advice and treatment captures their medical complexity (and personal wishes) correctly. With all the technological tools to personalize medicine these days, it is ironic how impersonal it can be when you rarely see the same physician twice. The gig economy forces us to be perpetual strangers, and that is perhaps its greatest drawback.