Four simple ways to connect an iPhone to a TV If you’re reading this, you must be familiar with one of the classic dilemmas of the modern age: You’re looking at something on your and you desperately wish it was on your TV across the room instead.

After all, why look at a small screen when a big one is right there? That YouTube video, , or vacation photo might really shine on your living room set, with the obvious benefit of making it easier to share that stuff with your pals during a hangout sesh. We have good news: Apple has made this process very simple over the years.

You can connect your iPhone to a TV using a wire. You know, like in the old days. You can also beam signals wirelessly between an iPhone and a TV, allowing your whole phone screen to show up in larger-than-life format. Heck, even products from competitors like Google can help out with interfacing an iPhone with a TV.

So, without further delay, here’s how to make your iPhone play nice with your TV:

Go old-school with a wire 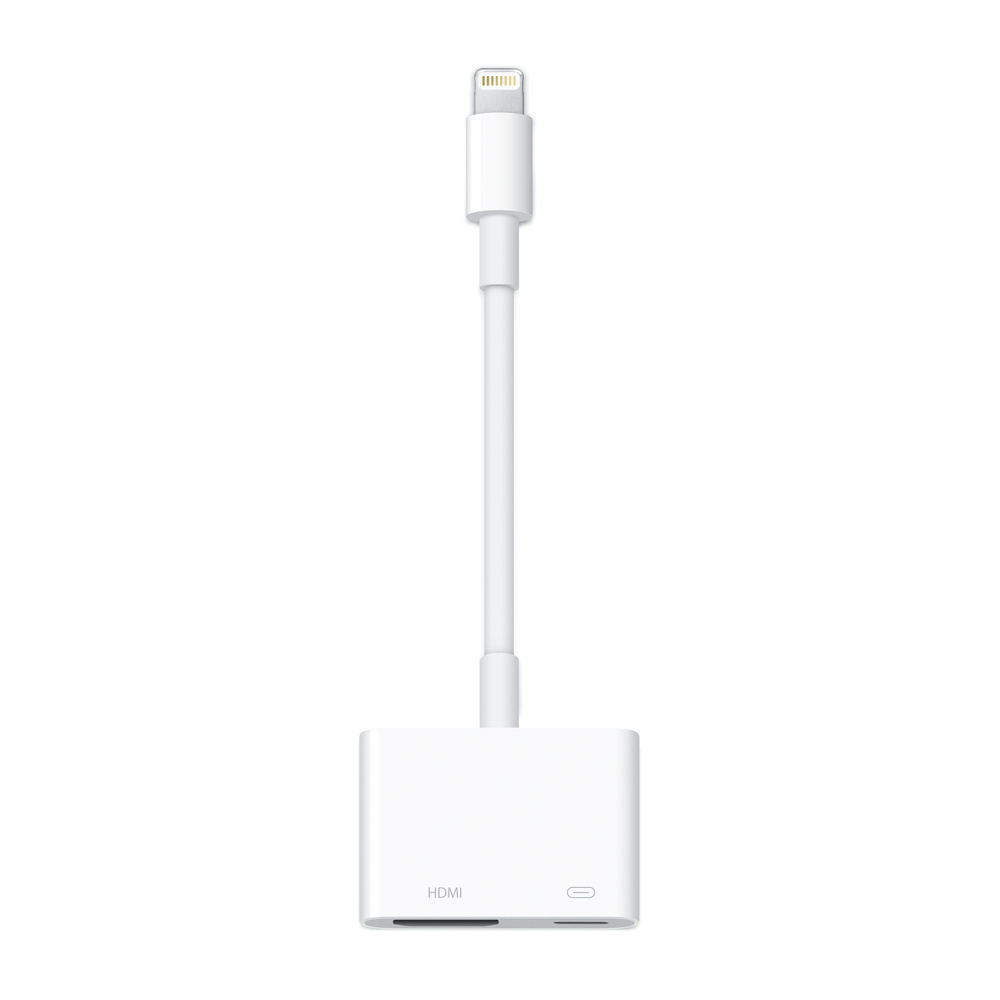 An official iPhone dongle you may not know exists
Credit: apple

Making just about any device output an image onto a TV has worked the same way across the board for almost 15 years. You connect one end of an HDMI cable into the device and the other into an HDMI port on the TV. Boom, done, your Xbox or Roku or what have you is spitting its signal out on your big TV. Perfect.

The obvious problem with iPhones in this regard is that they don’t have HDMI ports on them. They’re simply too large and bulky to be practical on any smartphone. That dinky little Lightning port on the bottom that you use for charging is going to have to suffice here. And to make that work, you’ll need to get Apple’s , which goes for a staggering $50.

Luckily, we’re not here to give buying advice. Get one of those if you think it’s necessary. It probably isn’t, as you’ll see in a bit, but you know your situation better than we could. If you do wind up buying that adapter, the steps for connecting, which appear on , are pretty straightforward:

Absent any weird glitches, that should be all you need to do. At that point, your phone’s display should mirror to the TV, allowing you to look at photos or play videos to your heart’s content. Some things might look a little odd since TVs use different aspect ratios than phones, but that’s the only real hiccup to this process. If that sounds too cumbersome or expensive, there’s a significantly easier and totally free way to do this.

You’re probably at least a little familiar with AirPlay, but if not, it’s Apple’s wireless device-to-device streaming solution that solves the problem we’re discussing today with just a few taps on an iPhone screen. All you need is an iPhone (would be weird if you were reading this without one) and an AirPlay-compatible device. A great many and even work with AirPlay these days, though if you don’t have either of those, an streaming box does the trick, too.

The key to is identifying the AirPlay icon, which should appear when watching videos in a web browser or in some streaming apps. It’s a little rectangle with an upward-facing triangle on the bottom.

Press that and you’ll be given the chance to connect to any AirPlay device in the vicinity and beam whatever you happen to be watching onto the TV. It must be noted that both the iPhone and the AirPlay device need to be connected to the same WiFi network in order for this to work. If you don’t see the device on the connection list after tapping the AirPlay icon, that might be the issue. 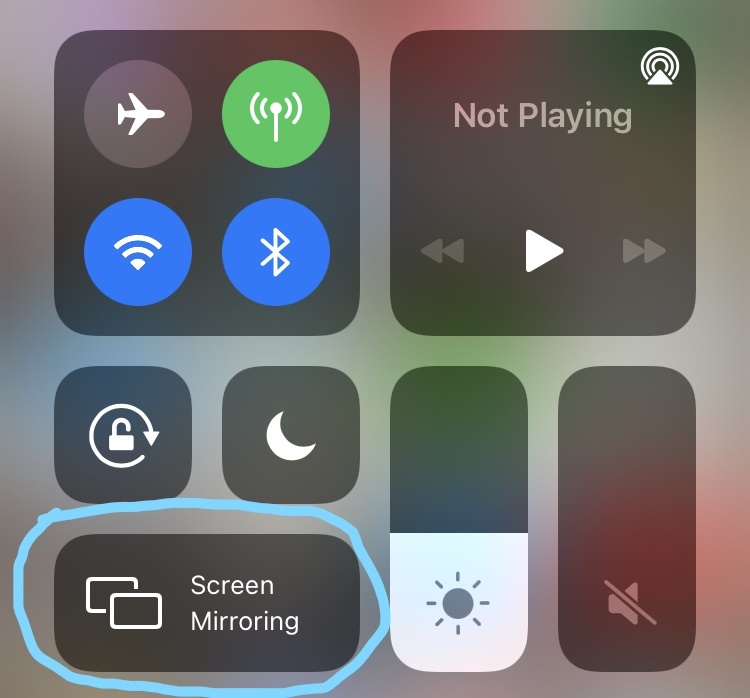 There’s also a way to mirror your iPhone’s screen to an AirPlay-compatible device, just like with that HDMI adapter, except without a big beefy cable getting in the way. If you swipe on your iPhone screen to bring up the Control Center, there should be a big button that, appropriately, says “Screen Mirroring.” Tap that, connect it to your AirPlay device, input the onscreen passcode if you must, and you’re in.

Assuming nothing went wrong, what you see on the phone will also be what you see on the TV. Obviously, there are drawbacks to this approach. You may not want the people in the room with you to see everything on your phone screen. Maybe hide the compromising text messages or embarrassing Google searches from view before you activate screen mirroring. That’s free advice and you should take it.

Using AirPlay to broadcast videos or mirror your screen to a TV is going to be the easiest way for most folks to share something on a phone screen with a room full of friends. That said, you can actually turn to a product from another big tech company to address this problem, too.

A Chromecast will get you part of the way there, too 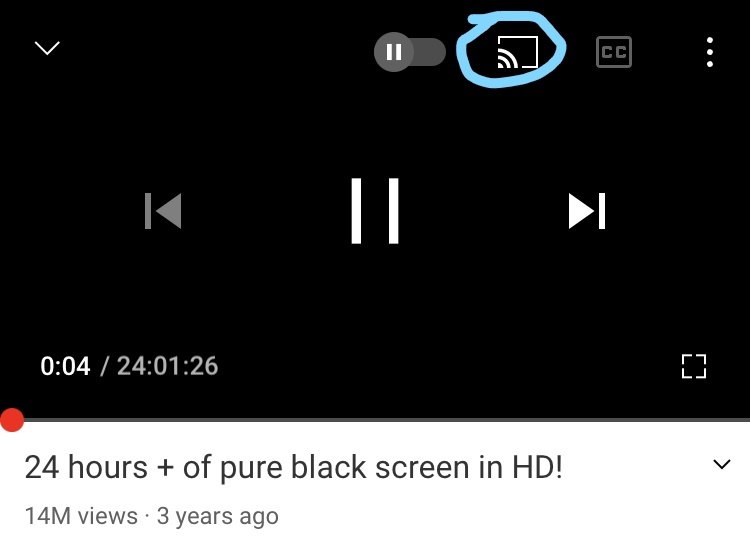 In case you ever need to cast a black screen to your TV
Credit: screenshot: alex perry / youtube: Candrfun

Google’s Chromecast technology might be made by an Apple competitor, but it works seamlessly with iPhones all the same. All you need is a or a .

For iPhone users, this will be limited to a similar set of functions as AirPlay. You can beam things like streaming apps and YouTube videos directly from an iPhone to a Chromecast by hitting the Chromecast icon, which looks slightly different from the AirPlay icon but follows the same general principle. Choose a device to cast to and the video should show up on said device.

The limitation here for iPhone users is there’s no official way to mirror an iPhone screen to a TV using a Chromecast. Android owners all they want, in exchange for being saddled with those ugly green text bubbles, but if you’ve got an iPhone, screen mirroring isn’t exactly an option.

Regardless, there are so many other options for blasting whatever’s on your iPhone onto your TV that it almost doesn’t matter. Whether you want to kick it old-school with an expensive HDMI dongle, rock with AirPlay, or roll with a Chromecast, it’s never been easier to show a room full of people that YouTube video you’ve been obsessed with lately.

This story was originally published in April 2021 and was updated in July 2021.