Excuse Me, Louis Vuitton, Are These UGGs?

There’s something eerily familiar about ‘s Snowdrop boots, and no, it’s not the price tag.

We all love kicking about in and regardless of the season, but nothing quite says “cozy winter style” like a pair of shearling boots. When it comes to this style of boot, is undoubtedly the universal standard.

If you went to secondary school in the UK in the late 2000s and onwards like me, chances are your non-uniform days were dominated by UGG boots. I’m not sure exactly who to thank for the Jack Wills gilet with UGGs to match movement, but I’m sure Joey Essex would take some credit.

While I’m 99.9% sure that Nicolas Ghesquière looked to the British school system and its student’s style choices as a point of reference (we can only dream), the new Louis Vuitton’s Snowdrop flat ankle boot looks and feels distinctly UGG. Sure, UGG didn’t invent shearling ankle boots, and there are plenty of other brands with their own versions, but the resemblance of these is uncanny.

There is no denying that the Snowdrop’s suede calf leather and shearling mix look like peak comfort, and its overlayed panel structure walks the line of riding boots – which totally works. Unlike similar boots that can be difficult to attach a brand to, you’ll make no mistakes identifying the Snowdrop thanks to the oversized LV logo and Monogram Flowers that wrap around the shearling ankle.

Clearly, a $1,580 boot is precisely what people were looking for because the “Cognac Brown” and “Black” colorways have flown off virtual shelves.

If you act fast, you can still grab a “Khaki” pair , or head over to Japan for an exclusive beige and pink pair. 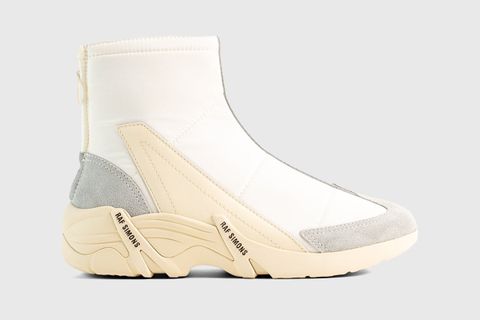