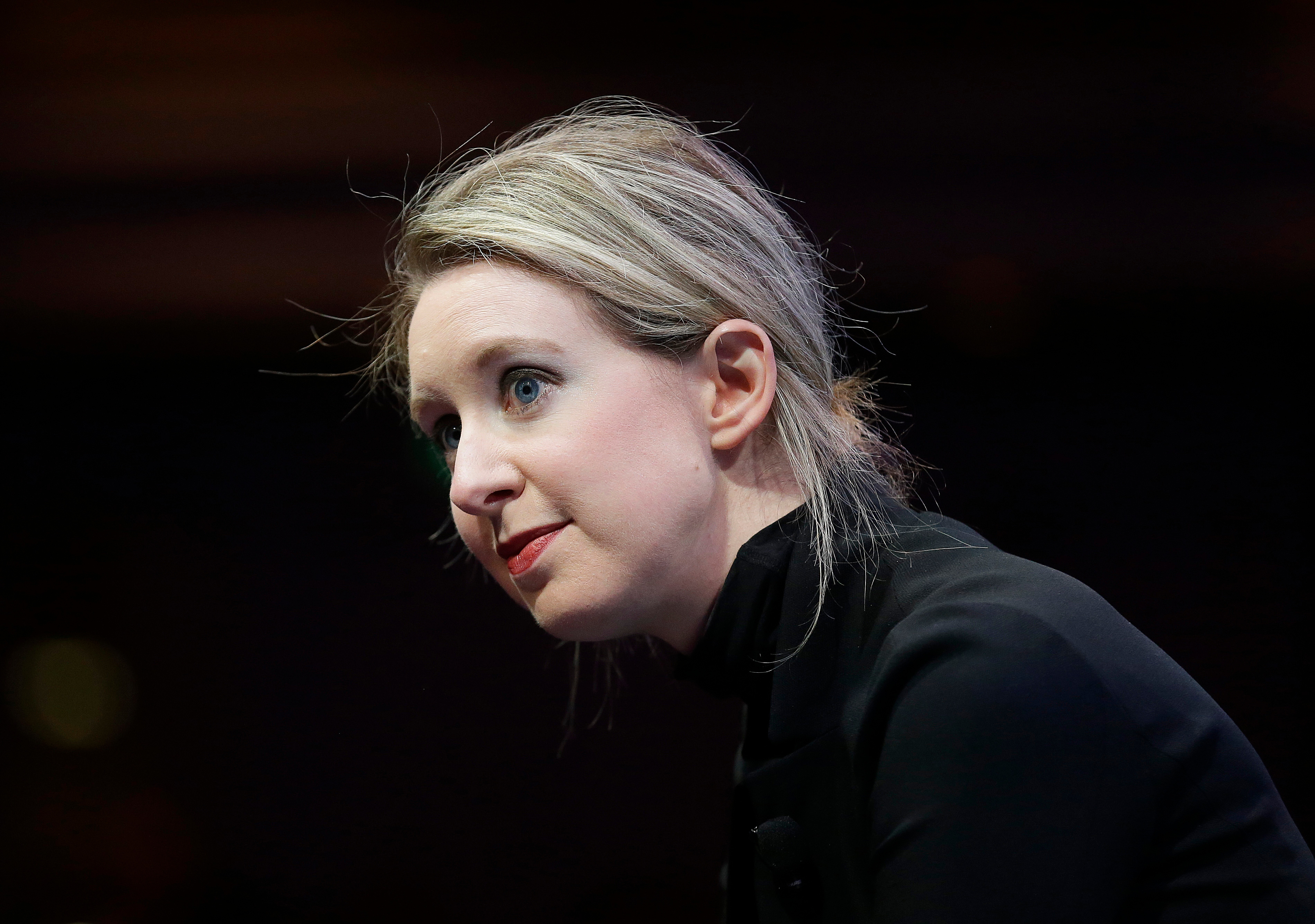 This post was originally published on March 31, 2019 and has been updated multiple times.

The federal government is taking Elizabeth Holmes to court.

As you probably know by now, Holmes was the founder and CEO of Theranos, the blood-testing startup featured in the HBO doc The Inventor: Out for Blood in Silicon Valley (as well as a book, podcast, and, eventually, starring Jennifer Lawrence). Also being charged is former Theranos president Ramesh “Sunny” Balwani.

The pair has already been tried in the court of public opinion. Now, they are facing a trial for making misleading claims about their company’s ability to accurately test pinpricks of blood for a catalog of diseases.

The trial began with on Aug. 31, and opening arguments got underway Sept. 8. Holmes is currently facing 11 criminal charges, including nine counts of wire fraud and two counts of conspiracy to commit wire fraud. If convicted, she could face decades in prison.

Here is what is going on with the criminal trial.

What are they charged with?

The government with two counts of conspiracy to commit wire fraud and nine counts of wire fraud.

The first conspiracy charge alleges that the two conspired to defraud investors, allegedly making “numerous misrepresentations to potential investors about Theranos’s financial condition and its future prospects,” according to the Justice Department.

The second conspiracy charge alleges that they schemed to mislead doctors and patients about the speed and accuracy of test results.

Most of the wire fraud charges concern six transactions. Investors transferred money to Theranos, which the prosecution says was based on fraudulent claims about what they were getting in return. Theranos also faces two counts for wiring test results to Walgreens patients in Arizona, and one for wiring money to a New York-based media firm in New York to buy ads for Theranos Wellness Centers in Arizona.

UPDATE 2/12/2020: The charges against Holmes and Balwani got narrower after . Judge Edward Davila said that he would dismiss any wire fraud and conspiracy charges regarding patients and doctors who had not paid for tests, or who had been reimbursed by insurance. That’s because, in the judge’s view, the fraud charges require injured parties to have lost money.

This does not affect the conspiracy and wire fraud charges based on defrauding investors, so although this is a legal victory for Team Theranos, Holmes and Balwani are still in a tight spot.

While the claims Holmes and Balwani actually made to investors, doctors, and patients were allegedly fraudulent, it’s the actions associated with that fraud — receiving money, and sending money and test results — that the federal government prosecutes.

What is the evidence?

The material evidence that we know about are the wire transfers themselves. But the prosecution reportedly has more than 12 million pages of documents it plans to turn over to the defense.

In October 2018, the prosecution also allowing them to review more than 200,000 pages of internal Theranos documents. The indictment also refers to multiple press releases and media appearances that Holmes made that the prosecution considers misleading.

What does the prosecution have to do to win?

While the meat of the case is laying out the story of Theranos — a multi-billion dollar business built on a — the biggest hurdle the prosecution is proving that Holmes and Balwani both knew about the fraud, and intended to defraud investors and customers. They both pleaded not guilty.

But in a deposition with the U.S. Securities and Exchange Commission for a previous civil case, that she made false statements about Theranos involving its ability to run tests and its supposed deployment in the military.

How much jail time are they looking at?

Holmes and Balwani could each face up to 20 years in prison, and a fine of $250,000 for each count of wire fraud and for each conspiracy count — for a potential total of $2.25 million, plus any additional restitution to victims.

What’s going on with the trial now?

UPDATE 1/3/2022: The jury delivered a partial verdict on Monday afternoon. Holmes was found guilty of four of 11 charges on Monday afternoon, including conspiracy to commit wire fraud against investors in the blood testing company.

UPDATE 1/3/2022: On their seventh day of deliberation, the jury said that they were “unable to come to a unanimous verdict on three of the counts” in a note read aloud in the court room on Jan. 3, NBC News reporter Scott Budman. Judge Edward Davila then instructed the jury to deliberate further to reach a final verdict. The jury has since returned to the deliberation room.

Holmes is currently facing 11 criminal charges, including nine counts of wire fraud and two counts of conspiracy to commit wire fraud over allegations that she lied to investors and patients about the accuracy and reliability of her blood-testing company’s tech. It’s not known which of those 11 counts the jury is still deliberating.

UPDATE 11/30/2021: Elizabeth Holmes is mounting her defense. She took the stand on Nov. 19, kicking off her testimony with four days of questioning from her attorneys.

Holmes largely claimed that she was not aware of problems with Theranos’ lab technology. She said that lack of transparency about using third party devices came from a desire to protect trade secrets. And on her last day of questioning by her lawyers, Holmes stated that she had been in an emotionally and physically abusive relationship with her business partner and ex-boyfriend Sunny Balwani. She said he had been manipulative, and tied his controlling behavior to her conduct as CEO.

On Nov. 30, cross-examination began. The prosecution aimed to show that Holmes was aware of, and took responsibility for, the entirety of the company — including Theranos tech’s shortcomings. They also showcased the way she had tried to control the company’s image, including by going directly to Wall Street Journal owner, and Theranos Investor, Rupert Murdoch, in an attempt to kill that ultimately led to the company’s unravelling. Holmes seemed to avoid confirming specific instances the prosecution raised about her understanding of company issues, but expressed some overarching remorse, saying that she had made mistakes.

Once cross-examination got onto the topic of Holmes’ relationship with Balwani, The Verge reporter Elizabeth Lopatto that several members of the jury looked uncomfortable. The D.A. showcased emails and texts between the two that both showed that they were in a “loving” relationship at the time, and that Balwani was not trying to conceal problems in the lab — that he had shared them directly with Holmes.

UPDATE 9/8/21: The trial is underway. Experts, investors, and victims of inaccurate test results are set to testify. In opening statements, the defense has positioned Holmes as a hard-working — if young and naive — businesswoman who never intended to hurt anybody. However, she was led astray by Balwani, and experienced investors knew the risks when they made their investments.

Meanwhile, the prosecution, led by Assistant U.S. Attorney Robert Leach, ended his opening statement with the assertion that “This is a case about fraud, about lying and cheating to get money… That’s a crime on Main Street and a crime in Silicon Valley” [].

UPDATE 5/4/21: On May 4, 2021, Holmes came to court for the first time in over a year. The coronavirus has delayed the trial, as has Holmes’ disclosure to the court in March that she was pregnant, and due to have a baby in July 2021, according to the .

Holmes and her attorneys appeared in court for the first of three planned days to discuss what evidence they can and can’t share with the jury.

Both trials have been rescheduled multiple times.

UPDATE 4/15/20: It will reportedly be a three-month trial, which is not surprising considering how much evidence both sides have to get through.

At an April 22, 2019 in San Jose, attorneys for the defense successfully pushed for more time to review the terabytes of evidence the prosecution has been mounting against their clients.

Where are they now?

Both Balwani and Holmes are out on bail. Holmes in 2019 to her hospitality industry heir boyfriend, and was that year, living it up at Burning Man and baseball games. She in March 2021 that she had become pregnant, and had her baby in July.

Have they faced any other legal action?

Yes. Earlier this March, Holmes with the SEC. She will pay $500,000 to the SEC and agreed to not pursue business leadership roles for the next 10 years (although she is supposedly while out on bail). Balwani is pleading not guilty.

Walgreens also , hoping to recoup some of its investments in the company in the wake of their .

UPDATE 5/4/21: Judge Davila began hearing pre-trial arguments in early May 2021 about the scope of evidence to include before the jury trial in August.

Additionally, prosecutors that the Theranos case is even broader than it appears at the moment — so more charges may be coming for Holmes and Balwani, too.

Correction 4/23/2019: A previous version of this story stated that a trial date had been set for July. This was not the case.