An Unsolicited Analysis of the Squid Game Cast’s IG Fits

Unless you’ve been living under a Netflix-deprived rock for the past month, chances are you’ll have seen . If not, WARNING, spoilers lay ahead.

In the online content game, whenever a Netflix Original show reaches a certain level of popularity, the starring characters’ style choices are inevitably pored over and dissected like they were a Kremlinology text. Some are labeled icons —  — while others are gleefully mocked, to the extent that think pieces start popping up on .

Squid Game is a unique case in that, despite its now official status as , there has been little in the way of sartorial discourse. That’s unsurprising, given most of the characters quite literally sleep in knock-off Palm Angels tracksuits. But even if there’s little to say about the show by way of a sartorial element, what about the actors? How do they scrub up when they’re not occupied with demented childhood past times in dollhouse-like rooms? When Googling “Squid Game fashion,” there aren’t many results outside some .

With little written about the now-internationally-famous Squid Game cast from a fashion bent (at least in Western media), I nobly took it upon myself to comb through each stars’ feed and judge their fit game accordingly.

Despite only joining Instagram a fortnight ago, there’s enough evidence in star man Lee Jung-jae’s 12 posts so far to suggest he is a fellow of taste. After all, he did work as a fashion model and has a background in interior design. The big man wears a suit very well (check out the ! And the loafers!), but this Brad Pitt-worthy aviator and corduroy jacket combination proves there’s a lot more to his game than formalwear. Coming to a men’s magazine front cover near you shortly.

Hae-soo is also a newcomer to Instagram, joining on the same day as his old mucker Jung-jae. With only seven photos uploaded so far, it’s thin gruel, but a word for the oversized suit he wore on Jimmy Kimmel. Even if the proportions are a bit off, we’ve got to admire the ambition.

Unlike Squid Game‘s older characters, talented cop-slash-dreamboat-slash-absolute-fucking-tank Ha-joon has been sharing fit pics for a minute. Like most 30-year-old dudes, he likes his sneakers, and also has a penchant for sweaters from sophisticated menswear label . It’s wholesome, sensible stuff, with extra marbles being awarded for his recent .

Now with a gig at Louis Vuitton, Ho-yeon has been heralded as Squid Game‘s breakout fashion star. Yet, having walked runways for the likes of , , and LV in the past, she was already a familiar face to those in the front row. It goes without saying that an internationally renowned model would have impressive style, as seen above when she went circa 2018 Bella Hadid Matrix style.

At 76 years old, I would have been perplexed to discover that Player 001, or Yeong-su, had an Instagram. Thankfully, he doesn’t. Instead, enjoy this warming portrait photo uploaded by a fan account that already has an impressive 69,000 followers.

Does Heo Sung-tae have an atrocious snake tattoo in real life? You’ll be relieved to learn that he does not. The actor might be a million miles removed in terms of personality from the show’s absolute mad lad (look how wholesome those pics with his mom are!), but was recently seen wearing a Sopranos-esque leather jacket with the kind of attitude that would have Silvio Dante nodding his head in approval.

The image of in a Dsquared2 cap and sneakers was an immediate red flag, but let’s not be hasty. At 51, he is every bit the #menswear don, and radiates the vibe of a top-level motivational speaker who charges upwards of $3,000 per hour for his services. He’s the type of person who we can easily envisage fronting a campaign for a dad wardrobe stalwart such as in the not too distant future. 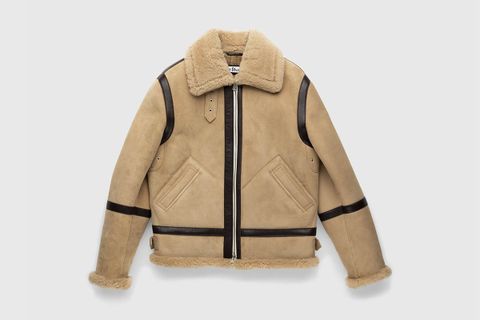 Want to keep browsing? Head to the for more products that we love.